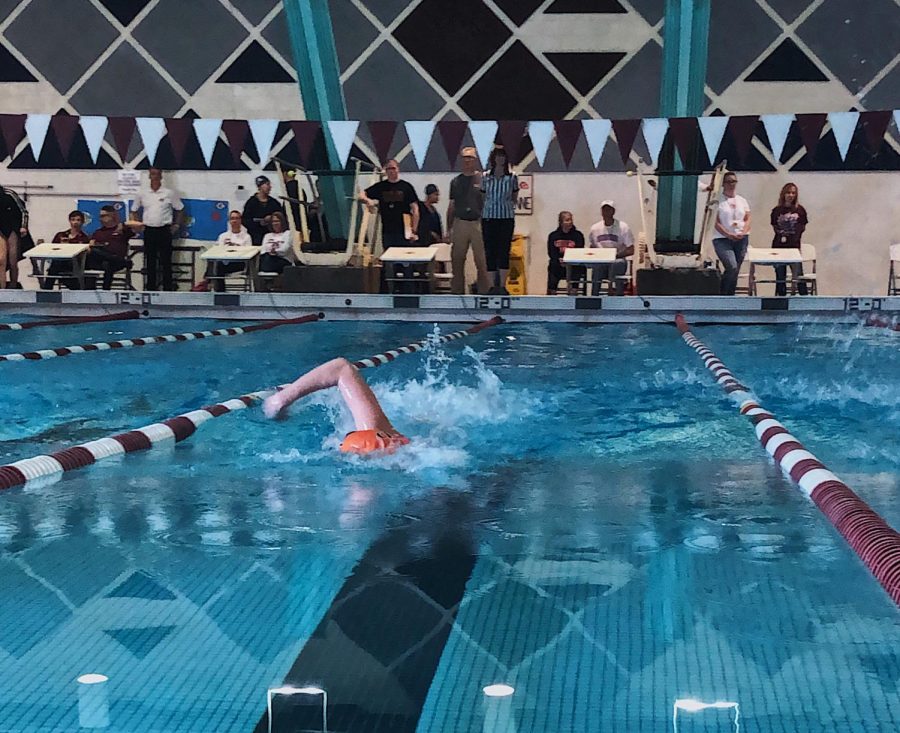 Meghan O’Connell 12, captain of the swim team, starts her first length in her 500 meter free. She is seated first in her heat and ninth overall. “Obviously they're great contributors to the team,” Coach Cromer said about the seniors. “...and great leaders on the team. Our captains especially.”

“Cheyenne Mountain has been our rivals for decades, even since I was on the team,” Coach Jackie Cromer said. “ And it always comes down to one or two points.”

The meet also took place right before the swim team’s annual senior night, where the team gives each senior an orange rose right before the meet. Teammates give commemorating speeches and presents to honor the seniors at the party after the meet. Losing before the dinner may have caused the seniors to be upset over losing against Cheyenne Mountain the last time they competed in a dual meet against them.

Every swimmer and diver was able to attend the meet. Swimmers not in an event would stand at the end of each Lewis-Palmer swimmers lane and cheer swimmers on. The Rangers held first place in the whole meet, and at the end won by 12 points.

“To beat them by 12 points was just incredible,” Coach Cromer said. “That’s the best that we’ve ever done against them. And I think it means good things for me, this coming weekend at PPAC (Pikes Peak Athletic Conference).”

Seven seniors were honored at the senior night dinner after the meet, two of which were divers and five were swimmers. There were picture frames to add notes on for the seniors to take to college. At the end, the seniors gave a small thank you to Coach Cromer for a wonderful season, and they also thanked their teammates.

“I always feel like there’s going to be big shoes to fill,” Coach Cromer said. “When the seniors leave the team, somehow the girls that are left always step up to build those spots.”