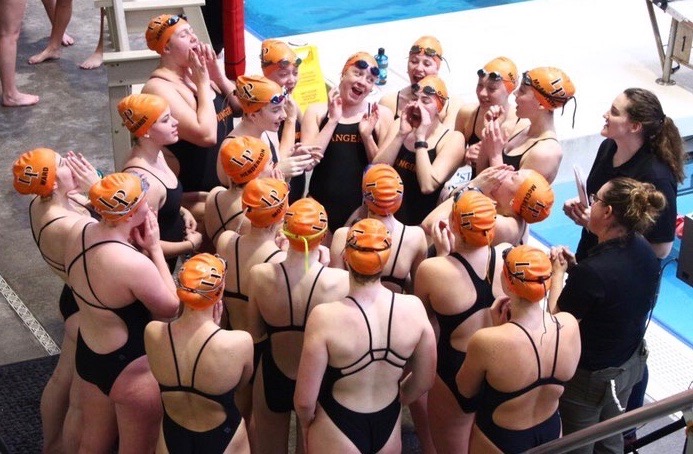 The Lewis-Palmer swim team gathers together for a team meeting. “The team atmosphere, and especially with high school swimming, it’s all girls so you really get some good connections,” O’Connell said.

Recently, Lewis-Palmer’s girl’s swim team competed in the PPAC swim competition against many other high schools. The competition took place at Cheyenne Mountain’s pool, where it happens every year.

Meghan O’Connell 12 is one of the many swimmers who competed at PPAC this year. “It’s our conference meet so there’s 7 or 8 teams in our conference, and we all compete against each other to see who is the best in the conference,” O’Connell said.

O’Connell competed in the 200 Freestyle and the 500 Freestyle. “The 500 freestyle was my favorite just because I have done it all 4 years at PPAC,” O’Connell said. “I definitely could’ve had better times, but I think overall it was my best times for the season and I did what I needed to do for the team.”

The team ended up winning 2nd place at PPAC. “Cheyenne Mountain beat us by 8 points, but we were supposed to lose by 50, so that was really good for us overall,” O’Connell said.

O’Connell has been swimming competitively since 3rd grade for the Woodmoor Waves Club Team. O’Connell enjoys the aspect of connections and bonding between her fellow teammates. “The team atmosphere, and especially with high school swimming, it’s all girls so you really get some good connections,” O’Connell said.

The team is preparing to compete in the state competition coming up this Thursday and Friday. This takes place at the Veteran’s Memorial Aquatic Center in Thornton, Colorado.

O’Connell is close to finishing her final season of high school competitive swimming. “I’m going to miss the team atmosphere and having a team bond, and all of us going for one goal because swimming normally is such an independent sport, but with high school swimming it’s more of a team goal to beat out teams as a whole and not just one person doing it,” O’Connell said.