Culture and Climate club discuss issues within the school 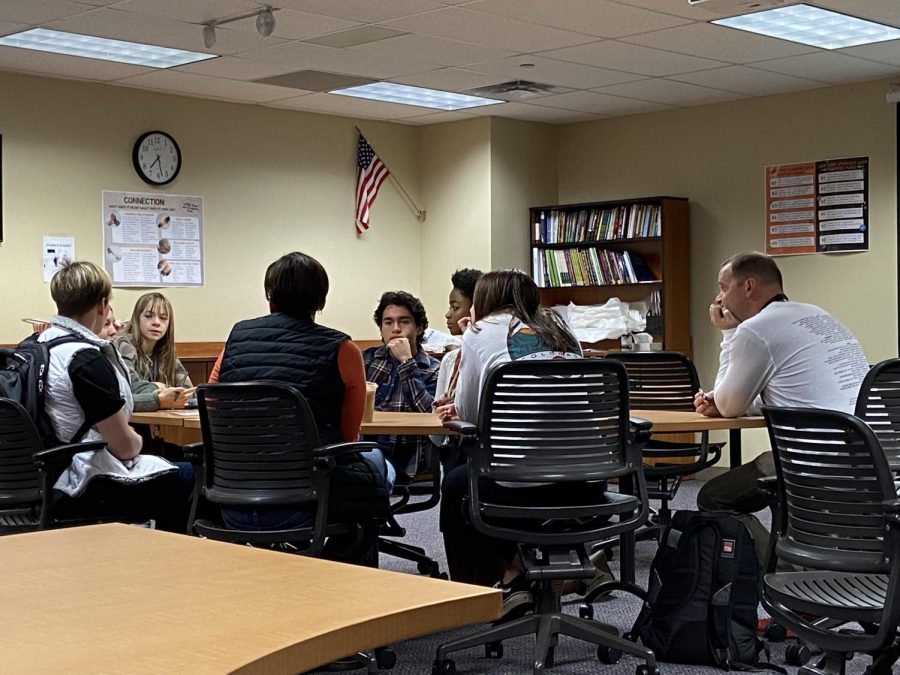 Mr. Kintz and Mrs. Baxter at a Culture and Climate interacting with students while having an open discussion. Angel Paredes (middle) and Griffin Greenwood (far left) brainstorming ideas on keeping students involved in and outside of school.

A recently started club (called the Culture and Climate Club) is purely based on student voice. Kids were nominated through teachers who selected them to be part of the association. The meetings happen once a month in the DLL where students from all grades come to discuss topics to improve the school.

“To be honest, I didn’t know about the club until this year. I haven’t been able to attend many of the meetings because I have lots going on during the mornings, but the one meeting I did attend was very interesting,”Griffin Greenwood 12 said. “Students divided themselves into categories they felt strongly about. I went to the student and teacher relations group because it’s very important to me. There were other groups like mental health and student involvement as well.

Students are welcome to speak their minds freely as long as it’s potentially going to benefit the school as a whole. Students have been given an open environment to speak and comment without feeling judged. Mr. Kintz starts the club off by giving students a goal to aim for at the beginning of the session. Like coming up with a list of solutions to help the issue that’s being discussed in that session.

“Students have been trying to focus on student involvement lately. They want people to feel like school is a second home. Students are also focusing on self-expression,” Hope Lacy 9 said.

This club has sparked multiple endeavors around the school.  Like Mrs. Swanson’s civics class wrote petitions to Mrs. O’connor about things they felt strongly about. Mrs. O’connor came in and discussed each of the petitions that were turned into her.

“Mrs. O’Connor told us about lunch lines and the dress code and discrimination. I found out that she and the other admin will be completely rewriting the dress code before second semester. She also discussed the shortage of staffing they’re having in the cafeteria. Both assistant principals and the sports director Mr. Baker attended the meeting as well,” Jack Lynns 9 said.

There have been two meetings with Mrs. O’connor and Mr. Kintz so far just to discuss the dress code. Students are allowed and highly encouraged to attend the meetings. The most recent meeting was to discuss the survey that is planned to be sent out soon. The survey is going to be sent out to staff, parents, and students.

“We were at the meeting to make sure the survey was asking clear and straightforward questions. We were also there to add questions or remove them from the survey. Teachers really want the survey to be student-oriented,” Hannah Brothers 10 said.

At one of the most recent Culture and Climate club meeting students were asked to make a list of things they have issues with. Then make possible solutions, so that by the next meeting they can discuss the actions they have taken to help fix the issue.

“I know for my group we are organizing a club fair for the week before Thanksgiving break. We’ve been trying to get as many clubs in it as possible. We are thinking it’s going to be during lunch in the cafeteria because then students are kind of forced to at least look at the club booths. Our goal is to inform students about ALL the clubs that LP has to offer. The group that I was placed in was the student involvement one,” Hannah Brothers 10 said. “We really try to give every student as many opportunities as we can to help them find their passions.”