Knives Out crushed the box office and my heart 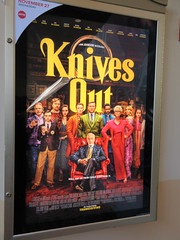 The movie Knives Out came out on November 27th and starred Chris Evans, Daniel Craig as well as many other celebrities.

The drama/thriller, Knives Out definitely fulfills its rating on rotten tomatoes which is 97%.  The actors portrayed their characters very well and pleased the audience with a lengthy and compelling 2 hours and 10 minutes of suspense and laughs. The classic mystery was as fascinating as Rian Johnson’s characters.

The movie had many familiar faces that would draw people to it, like Daniel Craig and Chris Evans. Daniel Craig casts the calm, private investigator which was surprising to see and completely contradicts his aggressive role as James Bond. Chris Evans as well portrayed a different kind of character. Despite his superhero role as Captain America in the Marvel Cinematic Universe, he played a classically mysterious role as Ransom Drysdale. I liked that all the characters bounced off each other and related to one another in one way or another.

In Knives Out, the grandfather passed away and there is an ongoing investigation on how it happened. The grandfather’s nurse got caught up in the action, which was a turn of events.  She almost killed him with morphine, but the grandpa loved the nurse like his own daughter and did not want her to get in trouble, so he killed himself, that way it looked like a suicide and not a murder. The personal investigator, played by Daniel Craig, was able to find clues throughout the investigation which in the end proved Ransom guilty for the murder of the chef and trying to kill his grandfather and get the nurse in trouble.

A lot of movies have similar concepts, but this one hooked me from the beginning and it also kept me interested throughout the whole length. However, I think they could have smoothed out the plot a bit because it was all over that place and was difficult to follow at times.

Overall, Knives Out was an instant classic with twists and turns along the way. Considering the unique characters and the interesting plot, I would give the movie a 10 out of 10. I am excited to see more work from Rian Johnson in the future.