Sophie Jones is a heartbreaking achievement in filmmaking 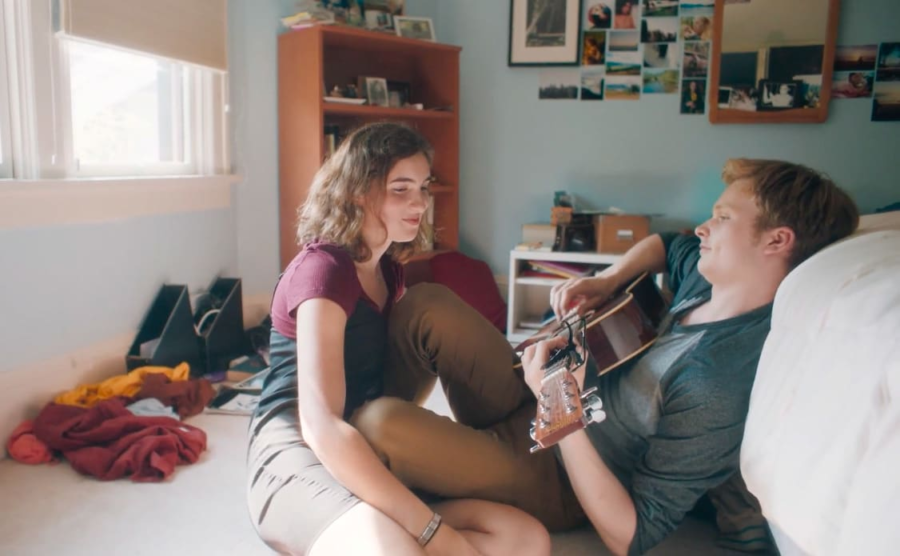 Sophie Jones (2021, Not Rated) is the feature-length directorial debut of Jessie Barr. Following the death of her mother, the film follows the titular character Sophie, played by Jessica Barr, in a quest for a place of belonging and comfort as she coasts through life as an otherwise ordinary 16 year old.

Written by director Jessica Barr and her cousin / lead actress Jessie Barr, the film is very small in scale. This however does not mean in the slightest that it is an amateur project.

The film’s cinematography is reminiscent of plenty other films distributed by Oscilloscope Laboratories such as Saint Frances (2020) or We Need to Talk About Kevin (2011), having been shot digitally and lit with natural light. This gives the film an immediate indie-charm, but doesn’t feel compromised in anyway by a low budget. Had this film been made exactly the same but under a studio like Warner Bros. or 20th Century Studios, it would do the rest of the movie disservice to make it any different.

As we watch Sophie attempt to move-on from her heartbreaking tragedy, the film takes its usual pit stops when tackling the coming-of-age elements: parties with cool older kids, occasional sibling tiffs, but the most prevalent in this film are relationships – more specifically, codependency upon the label of a relationship. This film asks some important questions most teens either think about too frequently or not frequently enough: “What is a true relationship?” “Is physical intimacy more important than interpersonal intimacy?” “Who can I trust?” “What do I want out of a relationship?”

Instead of going the usual route of having the lead character know exactly what they want only to face the harsh reality that not everything is what it seems, Sophie struggles to understand what she wants in the first place. Although quite a cliché, one of the best characters is Kevin, played by Skyler Verity. Kevin is a close friend of Sophie’s from her theater group, and is at first glance the typical ‘guy who pines over the main character who doesn’t like him back’. Where this film subverts our expectations is how their dynamic changes over time. They flirt with each other, only to fall-out, to get back together again, and then fall-out again. This cycle of quick changes aren’t a result of any standard relationship issues, but rather miscommunication and confusion. In her grief, Sophie finds only the quickest of fixes to the gaping hole in her heart satisfying as they require very little of her in the moment. Why she feels the impulses and urges that she does is never really explained, but I don’t think anybody really needs to know. Death is such a complex idea, and losing somebody you love is bound to cause an influx of decisions that leave other people hurt too, it’s just how it is. Sophie is a myriad of complexity, and the film certainly dives into her mind and heart just enough that we get most of her motivations, but the brilliance of this movie is that it pulls the rug out from under the audience precisely when needed so we can see ourselves in these arguably poor decisions and sympathize.

Even though most of the cast consists of non-actors and people with very little acting experience, nothing feels mannered or artificial. This is very welcome and is uncommon in this type of film. As to whether that can be attributed to great directing or just a great slew of actors is subjective, but I like to think it’s a hybrid of the two.

One thing I think a lot of people will notice when watching this film – especially teens – is that the modern day setting could have been tweaked a little better. Social media has a surprising lack of presence, and the licensed music choices don’t fit at all. Sometimes the music works, like when we watch our main character headbang to indie rock in her car, but when it comes to the party scenes they use very stock-music sounding dubstep/electro tracks that would maybe work if it was set in 2008, but not the late 2010s to early 2020. It pains me to say that though because the visual look of the period such as clothing has the appeal of both being modern and timeless.

Overall, Sophie Jones is a very delicate and entertaining movie, and I won’t be surprised if it finds a wider audience as a ‘hidden gem’ in the coming years. The characters are all relatable and easy to understand, and despite the low budget with seemingly melodramatic coming-of-age tropes, it never goes into unwelcome territory and never overstays its welcome, only clocking-in at an 85 minute runtime. I personally would rate this film an 8/10. It has a versatility that most films of the genre strive to achieve and can’t. It’s very heartfelt, and I highly urge anyone to check it out.

Sophie Jones is now playing in select theaters and on Virtual Cinema and is Not Rated.