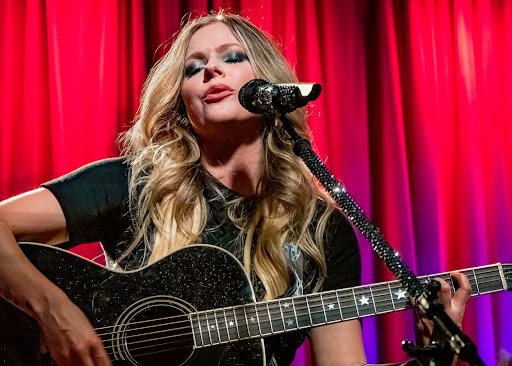 Avril Lavigne performing May of 2019 at the Grammy Museum in Los Angeles. Love Sux is available on most music streaming platforms, including Spotify and Apple Music.

On February 25, 2022. Avril Lavigne released a new album titled Love Sux. This is her seventh studio album and her first album since the start of the pandemic. She has since released tour dates in Canada starting April 30 and in Europe starting April 12 of 2023. The last time she released an album was in 2019 and it was called Head Above Water.

Love Sux is a punk pop album containing twelve songs, three of which are collaborations with Machine Gun Kelly, blackbear and Mark Hoppus. The singles that were released for this album were “Bite Me,” released November 10, 2021, as well as “Love It When You Hate Me,” released January 14, 2022.

“I felt like I was back in high school hanging out with the type of people I grew up with, and it was just effortless,” Lavigne said. “We’re just a bunch of band kids. This is what we’ve been doing since we were all in high school, and we’re still doing it now because we love music.”

The opening song is titled “Cannonball.” It is an explosive and high energy song so I would say it’s a great way to start off the album. My initial observation was the Blink 182 sound the song, and album, had. It has an angry attitude which I enjoy and it also reminded me a lot of her earlier albums, which are quite different from her 2019 release, “Head Above Water.” The song was quick and started the album off with a bang.

The song I like the least from the album is “Bois Lie,” which is a collaboration between Lavigne and Machine Gun Kelly. I found this song a little bit annoying mostly for the reason that I dislike Machine Gun Kelly and the way his voice sounds. Despite that, I do understand the collaboration because he and Lavigne are making similar music. It felt repetitive in a negative way as the melody had barely any change so it made the chorus quite annoying.

Perhaps the most popular song from Love Sux, “Bite Me” is my favorite one because it sounds the most like Lavigne’s first few albums. It was the first single released meaning it gained the most publicity and it is the most popular song on the album for a reason. It’s a catchy tune and although it maintains that pop punk sound, it had a different sound than the other songs on the album. To me it sounds like old Blink 182 which is what I like to listen to, and it sounds more rock than punk which is always something I like. Just like the first track, it’s angry and it definitely keeps the high energy throughout the album. This song reminds me of one of my favorite older Avril Lavigne songs, “Everything Back But You”.

The last track of the album is called “Break of a Heartache.” I do think it is a good way to end the album, but I wish it gave more closure. The lyrics do talk about being mistreated and not wanting for it to happen again which feels like the first track, only worded differently. It gives a different vibe than the first one and it’s more mellow and I feel like it was a mediocre way to end the album.

In short, Love Sux is an album I will continue to listen to. It gave me new things and it made me feel nostalgic because of the way she tied all of her music eras together. I love hearing the “Girlfriend” in these songs but in a new and mature experienced light as Lavigne is now thirty-seven. I rate this album an eight out of ten. It felt nostalgic and new at the same time and I really loved the collaborations with the members of Blink 182, Mark Hoppus and Travis Barker. I would recommend this to others because it’s not too punk and it’s pop enough for anyone to enjoy.