The Regrettes take a pop approach to their music 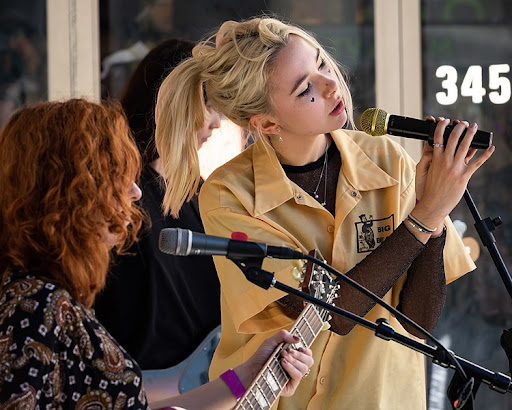 Singer Lydia Night and guitarist Genessa Gariano perform in Los Angeles, California on September 29, 2018. The Regrettes will be playing Colorado on their Further Joy tour on May 17, 2022.

On April 8 of 2022, The Regrettes released their new album titled Further Joy which they are on tour for right now. During this tour they have played two shows at Coachella. Further Joy is their third official studio album. Their very first album is called Feel Your Feelings Fool! which was released in 2017.

Further Joy is in the indie pop genre and includes thirteen songs, four of which were singles that were previously released throughout the year. “Anxieties (Out of Time)”, “That’s What Makes Me Love You”, “Monday” and “You’re So F ing Pretty” are the singles that ended up on the album.

The first song on the album is one of the singles called “Anxieties (Out of Time)”. It sets the tone for the album as a dreamy kind of pop. It was a surprise that this song was the first one because it is by no means a strong start to the album. This is not a song I particularly favor as the sound isn’t my preference. This album has a constant theme of being inside your own head so I feel like the title and lyrics really introduce this album well for what it is.

The song I favor the least is one hundred percent “La Di Da”. It is repetitive and it feels as though there is not really a story to go along with it. I don’t always need a story along with it, but it just feels like the chorus became lazy. Lyrically, this song is the weakest on the album and the “La Di Das” gets annoying after a couple times of listening to the song.

The song I love the most is “You’re So F ing Pretty.” Although it’s the slowest song on the album, the message of it is meaningful to anyone who listens to it. You could see yourself or someone else as pretty and it would apply. This song is just a pretty song and it’s a good song to relax because your brain doesn’t have to be sad or angry along with the lyrics.

The closing song of the album is titled “Show Me You Want Me”. This song is a great choice for the last song of the album. It talks about having time in your life for a relationship and wanting closure in the relationship hence the title of the song. It’s important to resolve the album in a way that talks about closure in some way and I feel like this song did a good job doing that.

Further Joy is an album I hope I grow to love more. With pop punk being their main genre in their first two albums, this is a change and transitioning to indie pop can only work sometimes for me. I do enjoy most of the songs on this album and I hope in the future, I will look to listen to it more often, it’s just hard to get used to. I would rate this album a seven out of ten. I feel like most people would find this album pleasant, but I feel like the demographic is teenagers.