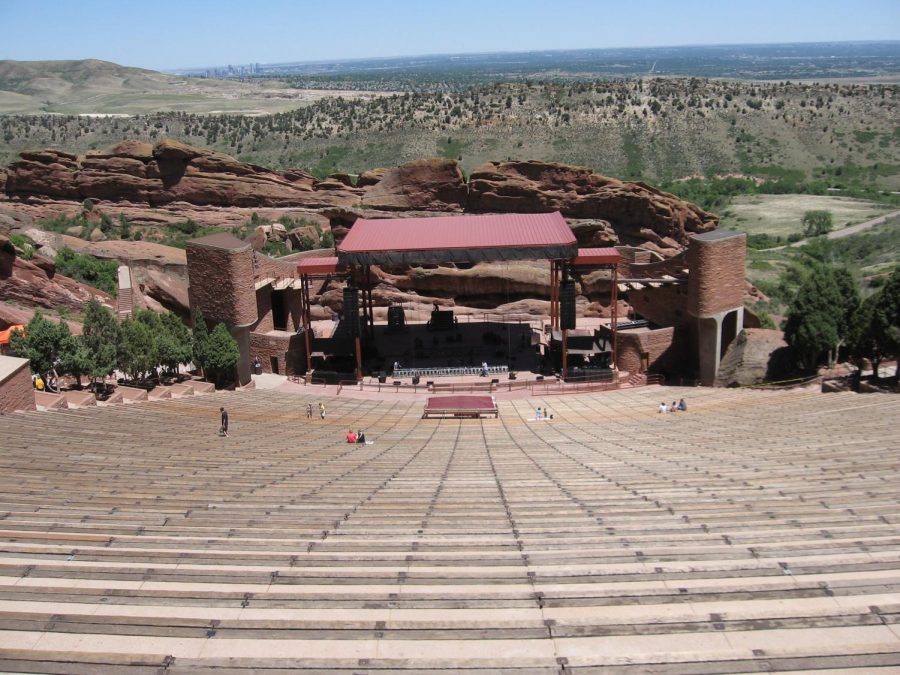 A view from the benches at Red Rocks looking down on the iconic stage, in the summer. "Red Rocks is like no other," Dan Oshinksy said.

Red Rocks Amphitheatre may be one of the most famous landmarks in the state of Colorado as it is one of two Denver National Historic Landmarks. Opened in 1906, John Brisben Walker achieved his goal of creating an entertainment venue.

What we know as Red Rocks Park and Amphitheatre today opened up in 1941; however, John Brisbane Walker, the manager of Denver Parks, hosted concerts at a temporary platform, until he convinced the city of Denver to purchase what at the time he called The Garden of Angels in 1910. What is now known as Red Rocks, located in Morrison, Colorado,  took around 200 million years to form. The earliest recorded concert was Grand Opening of the Garden of the Titans, hosted by Walker featuring a 25-piece brass band orchestra. Most people consider the Beatles to have had the most noble performance in Red Rocks history on August 26, 1964.

“Although musical events have taken place at Red Rocks since the early 1900s, the then-just-finished amphitheatre was officially dedicated on June 15, 1941,” Gregory Dauer said. “Paving the way for the stellar international reputation the venue — owned and operated by the City and County of Denver — enjoys today with musical artists and fans.”

Red Rocks is considered one of the most unique concerts venues in the United States. Red Rocks has bench-seating with extra wide isles, which allows for up to 9,525 guests to dance and easily maneuver their way around the amphitheater. In addition, the venue allows for all guests to look out amongst the Denver skyline and city lights once the sun goes down.

“What makes Red Rocks so unique is the elevation, the structure of the rocks, the geology and the environment of being outdoors,” Mrs.Whitacre said, “My favorite memory there is when my mom took me there to see Steve Miller and they let me in for free since I was just a kid with a single-mom.”

Red Rocks has had several people perform on their stage,  ranging everywhere from Snoop Dogg to Kenny G. Some of the most famous and well-known performances at Red Rocks are Jimi Hendrix, the Grateful Dead, U2, the Beatles, John Denver, Mumford and Sons, John Mayer and Tom Petty. Most artist view Red Rocks as a high-tier success and an honor, people even compare it to playing at Madison Square Garden in New York City. The Denver Post stated that up to 20 artists compete to get one show a Red Rocks, during the summer there is usually a concert everyday at Red Rocks.

“They’ve all played here, because the sound at Red Rocks is like no other.  It takes a song and makes it transcendent. It takes a band and turns them into god’s.” Dan Oshinsky said, “Red Rocks takes a concert and turns it into a quasi-religious experience. And it doesn’t really matter who you see. It could be the String Cheese Incident. It could be Erykah Badu, or the Goo Goo Dolls. All that matters is that you go.”

On about every tourism website, Red Rocks is recommended to every visitor, as it is considered to be “the best venue in the world”  by the Denver Post. It is estimated that 750,000 concertgoers visit Red Rocks a year.

“I really want to go to Red Rocks,” Delaney Champion 10 said. “It sounds super unusual and quirky and it is a place I definitely want to visit.”

Not only do visitors attend concerts, but there several other events are held at Red Rocks. Yoga on the Rocks is one of the most popular, as people get to take in the view and get a work out in. Around 2,000 yogis attend the yoga classes. As Red Rocks is at an altitude of 6,435ft, working out at higher elevations increases red blood cell count, making oxygen exchange more efficient at lower elevations.

“I would be interested in doing yoga on the rocks. It would fun to be in a new environment and experience new instructors,” Mrs. Schatz, a yoga and physical education teacher at Lewis-Palmer said. “It would add excitement to something I already know and what other people know or do not know.”

Film on the rocks is also popular amongst Coloradans as classic movies are shown amidst the rocks. Cult-classic such as “Ferris Bueller’s day off,” “Grease” and Star Wars,” have all been shown. Each film includes a performance by a live band and comedic act, and the movies start at dusk in order to create an ominous vibe.

“I think Red Rocks would be a really cool place to go see a movie,” Ali Reyman 10 said. “I would definitely be interested in seeing a movie with all my friends and family there.”