COVID-19 Forces Changes in the Band and Drama Departments 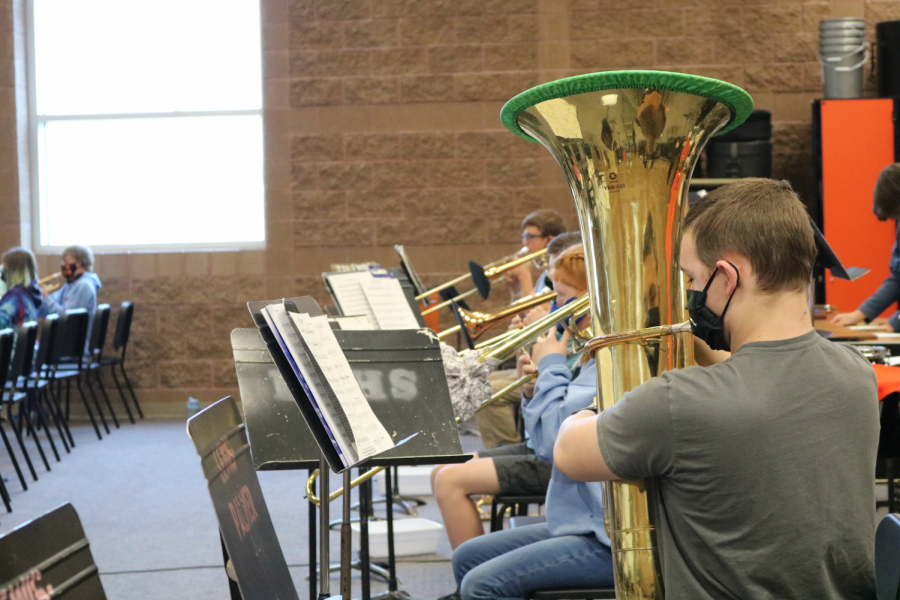 The LPHS cohort B Symphonic Band rehearses their group piece, Abracadabra. "Sometimes the teachers that make you struggle the most are the ones you end up learning more from in the end," Chapman said, "Trying to find the balance between making the band sound good and making you guys struggle and knowing that it has to not be fun sometimes to get to the reward that we want."

COVID-19 has affected everyone differently. We’ve all had to make many changes. In our lives, in our sports, and even in our classes. Some of these classes that need to make a few extra changes to ensure the safety of everyone are band and the drama classes.

Band has had to make some minor, yet still very present, changes. All band students must keep a bell cover on at all times, as well as, they must all play while still wearing masks. Students have had to make or buy their own masks that are able to fit their mouth pieces; however, some frustrations have been seen with these.

Among the multitude of changes that the band has had to make, there will not be any concerts this semester, if not during the entire year as a whole. In replacement of these, band students are doing independent studies where they get to choose a piece of music they work on for about a month then submit it for a grade.

“I kind of thought about it and thought, ‘what can we do to make up for it?’ and I arrived at what we’re doing, which is kind of an independent study thing,” Tom Chapman, the LPHS band director said, “I’ve left up to the students. Pitch me something, maybe you want to work on a small ensemble, maybe you want to focus on the playing test, focus on something to make yourself better.”

Obviously, with not being able to put on concerts, the band program would have to change from what it got to be in past years. Chapman was worried about his students not being able to enjoy the program as much considering some of these changes.

“I think the biggest challenge from there was helping all the students realize that it’s not going to be what they signed up for in the program. I think that’s probably the thing that weighs on me the most is I worry most about the students,” Chapman said, “How patient are you going to be? How meaningful can I make this? Knowing that what you all signed up for when you picked up your instrument, putting on concerts and playing together, is not what we have available to us.”

Despite Chapman’s worries, all students are eager and excited to be able to play together as a group again. Even if the group is cut in half.

“I am so happy we still get to do band. Band is one of my favorite extracurriculars that doesn’t take a lot of mental energy to do, but it’s still really fun,” Ferrante said.

However, for every disappointment COVID brings about, there is a new array of positivities not trailing far behind. Students as well as the band director have managed to find the silver lining in the changes.

“I think it’s really nice that for our Independent Study we can use the music that we’re going to use on our playing test,” Ferrante said, “It just allows us to better prepare for that, so with the class time we get to use, we get to kill two birds with one stone and work on our playing test as well.”

Another one of the departments in the school having to make pretty drastic changes is the drama department. One of the biggest changes being that the show had to be split in half and separated between the cohorts, as well as the musical got pushed back until (hopefully) the spring.

“We are doing separate rehearsals currently. Cohort A rehearses Mondays and Wednesdays, and Cohort B rehearses Tuesdays and Thursdays,” Jack Markowitz 10 said, “But during the actual show, we will have the shows back to back.”

With the show being split into two one act plays, both cohorts are getting to do their own show. Cohort A’s show has a special factor in it, that being there’s no dialogue in the entire play.

“The play with no words even said this show can be done with masks on, and this was written thirteen years ago,” Jordan Clark, the drama teacher at LPHS said, “She wrote to be done in masks which is insane because how do you communicate when people can’t see your face.”

Drama students are excited about the show, eager to take on a new challenge and increase their acting abilities.

“One of them doesn’t have any lines, it’s really just a challenge to figure out what the story is telling,” JJ Petak 10 said, “Audience members can figure that out for themselves, and make the story as they would.”

Just like with the band department, the drama department is also able to find the light in the darkness and look at the positives that COVID has brought.

“We might be able to pull off four shows this semester. Which that’s more than we get to do in a normal semester. That would be awesome,” said Clark, “Especially when everyone says it can’t happen, and we’re making it happen.”