Drama Club takes the stage after the Covid Year 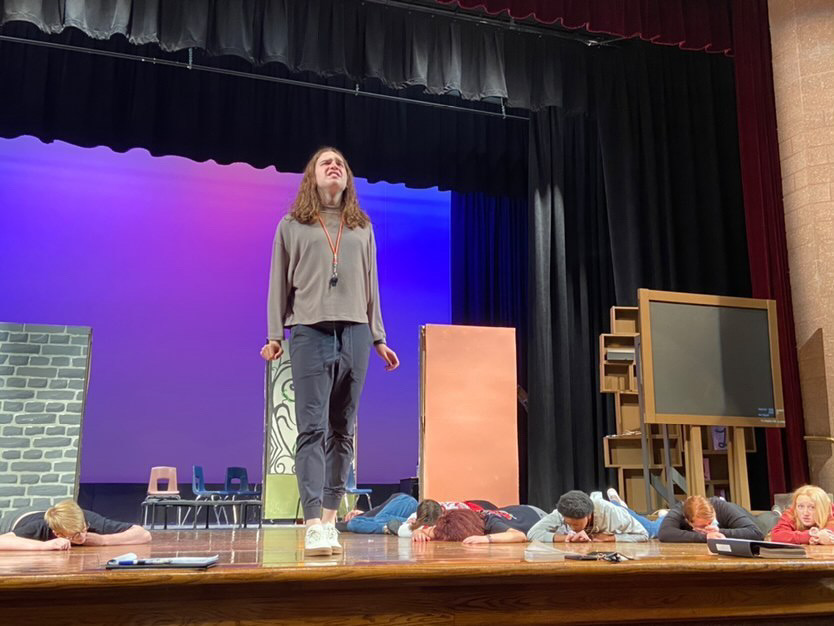 Jack Markowitz 11 practices one of his solos, “Smell of Rebellion”. He worked really hard to get the role of Miss Trunchbull. “She's very passionate about cruelty and she's mean and really has little heart so it's interesting and difficult to kind of dive deep into my cruel side,” Markowitz said.

The production that the drama club is putting on this year, Roald Dahl’s Matilda the Musical, is about a gifted little girl who faces challenges that occur in her family and at school, and with the help of her teacher gets past those challenges. This year, the show is being directed by Kris Lilley and the musical director is Aaron Miller. The shows are November 4th through 6th and tickets are available on showtix4u. Jack Markowitz 11 and Claire Deboer 12 are part of both the drama club, as well as the musical.

With the play and musical last year being limited cast and seating, the cast and crew are excited to be back on the stage for a full audience and a full length show.

Being a part of drama comes with challenges whether it has to do with putting scenes together, playing a certain character and bringing the show together in the end, but all challenges are faced with solutions in the end to make a great show. This year brings new challenges.

“There’s a lot of change going on and we’re just trying to figure out a bunch of different little I guess techniques on how to learn from each other and to grow as a theater Department. Having a new teacher in itself could be considered difficult,” Deboer said. “And what’s hard about playing Miss Honey is her solos and figuring out how she interacts with other characters within the show.”

Putting on shows brings joy both to the cast and crew as well as the people that come to see the show in full. Having a show this year and having it come together is something that the drama club is overwhelming, as well as very exciting.

“My favorite part is always the last couple weeks when I start to see everything come together with props and with the costumes. I really can start to develop deeper into my character and it starts to feel more real,” Markowitz said. “It really shows how much work goes into a show and it makes it feel like our hard work is paying off.”