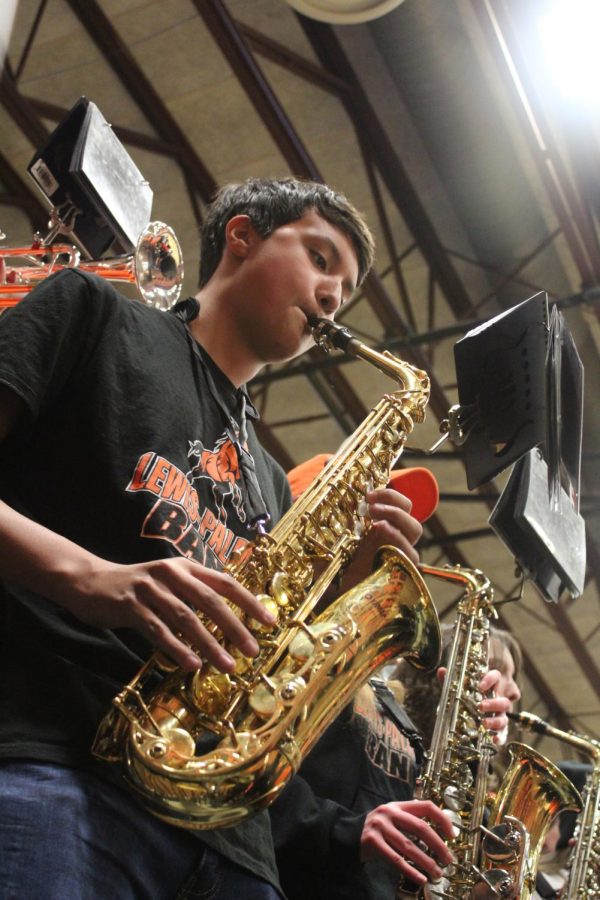 Trevor Arcarese 10 plays alto saxophone at the LP vs PR basketball game for the Pep Band. Arcarese has been playing saxophone for 3 years and he fell in love with the unique instrument the first time he heard his friend playing it. “The alto sax was created very recently, it has good tone quality so basically I think it just sounds the best out of all of them,” Arcarise said.

Everybody hears them playing at football and basketball games, but also rehearsing around the school. They are the inspiration behind the dancing, the excitement and the waves at the games. However, the Pep Band is much more than just “Bad Romance” and shiny instruments.

“For everybody in the Pep Band, that’s where all their friends are. So for them it’s like a club where they get to come and hang out, play their instruments but really they just get to laugh with friends,” Tom Chapman, director of Pep Band said.

More than 20 students get together in their free time to play their instruments without any sort of boundaries, playing as loud as they can. For most of its members, Pep Band is more than just music and friends. Having an important role in building up their confidence in all the areas of their lives.

“[Pep Band] helped with how shy I was. I tend to be really shy around people I especially don’t know. And so I think just in terms of like, musical sense, it really did help me become more bold, but also in a social sense, “ Olivia Torres 12 said. “I became more willing to talk to people and less shy, more extroverted.”

There are a lot of challenges while playing in front of a big crowd, but for those who choose to join the Pep Band, the experience was worth it.

A big goal of the Pep Band is including everybody, making them feel useful and heard. This vision has been the root for the band’s success so far.

“That’s one of my main goals with Pep Band is to just let it be as student-run as possible. Because it is one of the few things in music that we get to have,” said Chapman.

When it comes to misassumptions and critiques, Pep Band knows where they stand. The experience they get out of it was always their main focus.

“I think that the students who are in Pep Band are 100% there for the experience that they’re getting, we just like showing up and having fun,” Mr. Chapman said.

Pep Band is a place of belonging, where everybody participates with their own talent and instrument, finding their place around easily.

“It’s the one thing where we don’t divide up by classes,” Chapman said. “In Pep Band everybody just gets to show up and make loud noise together.”