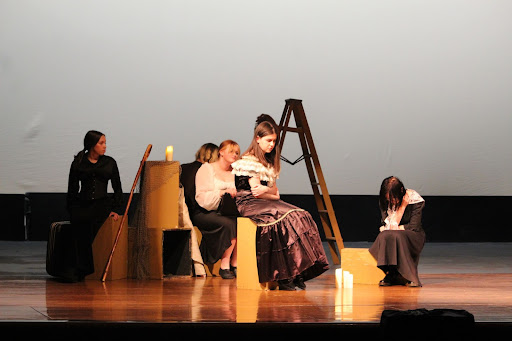 Dajana Rakar 11 plays Aud in “There’s No More Dying Then." She has been in the U.S. since August 2021 and is already involved in several extra curricular activities such as Key Club and LP Outdoors Club. “Theater was a wonderful experience, I met a lot of people and made connections with them,” Rakar said.

On Thursday, February 10th, Drama club performed the One Act Play, “There’s No More Dying Then.” All the profits will go to a local food bank to help those in need, especially this time of year.

“Our charity events for theater are exciting. I’m glad that the time performing and all of our work is going to a good cause. It’s just three cans or $5 and it’s going to help a lot of people,” Dalilah Williams 10 said.

Friends, family and teachers came to support the good cause and our school’s drama club. They all contributed to the charity either with money or canned goods.

“It was a really interesting show,” Kaitlyn Ivall 11 said. “The actors did a great job and I love coming to support their efforts.”

Even though it was a smaller play, “There’s No More Dying Then” stands out through its meaningful story. Based on Norse mythology, the story starts with different characters who bond together while trying to overcome the same impossible challenge: forgetting the past.

“We find out there are some characters stuck in Niflheim, which is like a limbo before they can go on to Valhalla, so they have to forget all their past to be able to go on to the afterlife,” Kris Lilley, Drama Club adviser, said.

Besides working hard for the charity event, they also put work into participating in the One Act Play Competition held on Friday, February 4th at Palmer Ridge High School. There, more than seven schools performed their own One Act Play.

“We were all just thrilled to be able to come back together to do live theater. And to be in the same room where we could cheer each other on and watch different shows. And then we saw lots of different shows that day,” Lilley said.

One of our exchange students from Bosnia, Dajana Rakar, won a prize for Best Supporting Character. It was Dajana’s first interaction with theater.

“I was so happy, even shocked,” Rakar said. “It was the payoff for my hard work. Now I’m looking back at this entire experience with excitement, even though it wasn’t that long.”

After a year of not being able to perform in front of a big audience, the students came back on the stage more excited than ever, ready to overcome any challenge.

“My favorite part is the energy our actors have brought into every play. Sometimes I ask them to do silly things where it doesn’t make sense, and they make every moment so fun,” Lilley said.

Besides having fun, students learn to dig deeper in understanding a character, and how to overcome challenges like stage fright and handling critiques in their performances.

“I had never played a part like this and so I learned how to work with my character and how to practice the walk, the talking, what kind of clothes they wear,” Williams said. “I really went into the depth of my character which I had never done before and it was really exciting.”

Theater is all about community and belonging, everybody has a place and is always welcomed with open arms.

“There’s always a place for everybody because we need people who can paint well, work with sound, shine the lights or who are able to perform,” Lilley said. “There are many aspects and that’s why if somebody wants to be involved there is a place for it.”