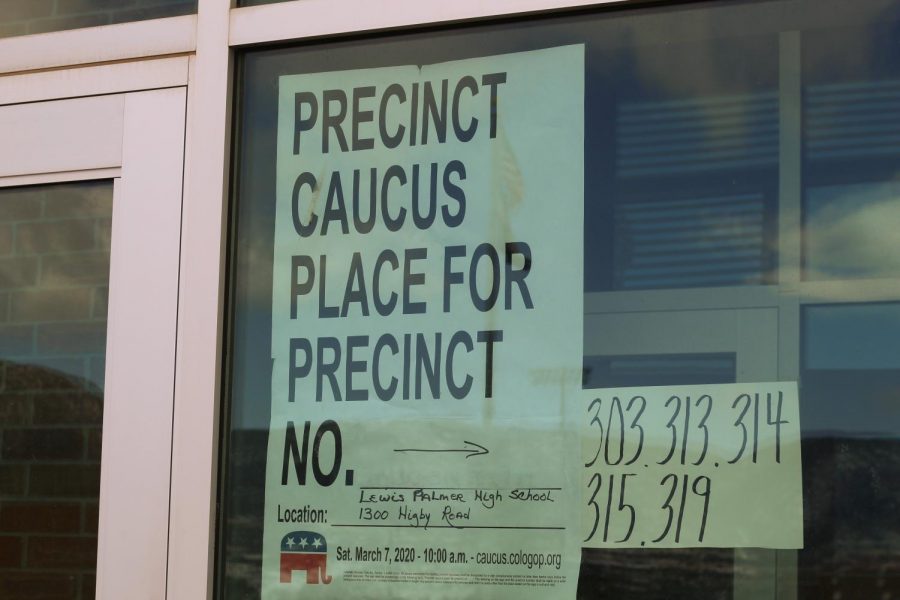 A sign was posted outside of Lewis-Palmer High School to inform the community of precinct caucuses. Republican Senate Caucuses will be held at there on March 7th at 10:00 a.m.

Many students at Lewis-Palmer High School can vote in the primaries if they are registered already for their political party. Seventeen-year-olds can participate in the upcoming caucuses and primaries, as long as they are turning 18 before the November 4th election.

Although many young voters do not understand the implications of voting in the primaries, the caucuses are, in fact,  separate from the main election vote. If residents of Colorado want to participate in caucuses, they already need to be registered to vote with their current address.

Both Republican and Democratic caucuses will be held on March 7th. These caucuses are called preference caucuses meaning that they help senate candidates be aware of their standing in the polls. The preference polls will decide what candidates will actually be on the Senate ticket.

The Coloradan, a local Colorado publication, explains the Democratic senate race further: “In the Senate race, Democratic candidates will eventually need at least 30% support at the state assembly in April to get on the primary ballot—unless they’re also trying for the primary ballot via petition, which requires 1,500 signatures from each of Colorado’s seven congressional districts.”

Despite all of this information being available on the internet and being taught in freshman year civics at Lewis-Palmer, students do not fully understand voting processes and terminology.

“I have absolutely no clue what the difference is between a caucus and a primary,” said Luke Delange 9.

Further information about primary voting can be found on the Colorado Secretary of State Jena Griswold’s website: https://www.sos.state.co.us/pubs/elections/FAQs/primaryElectionsFAQ.html