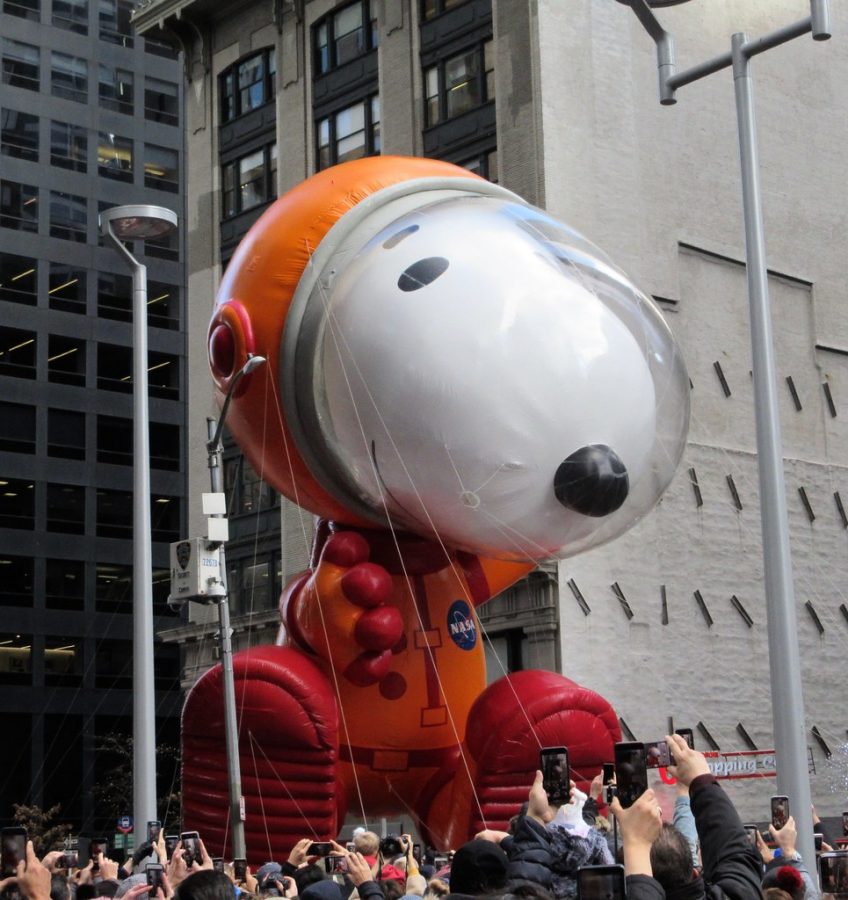 Astronaut Snoopy, designed by Joey Ammons, flies above the crowd as spectators photograph and record the beloved beagle character. "2019 Macys 93rd Thanksgiving Day Parade Astro Snoopy 0551A" by Brechtbug is licensed with CC BY-NC-ND 2.0. To view a copy of this license, visit https://creativecommons.org/licenses/by-nc-nd/2.0/

After the absence of a crowd due to COVID-19 restrictions last year, the annual Macy’s Thanksgiving Day Parade was back with spectators. However, safety precautions were still made. The parade started at 9am EST and the fun lasted until noon, with the grand finale of Santa Claus’ appearance.

Floats, balloons, dancers, and marching bands filled the streets of Manhattan as spectators were allowed to watch, although encouraged to wear face masks.The parade was hosted by Savannah Guthrie, Hoda Kotb, and Al Roker of the Today Show. “This year, the parade’s back at full strength,” said Mayor De Blasio on the 24th of November.

The parade has a long and exciting history. The tradition began in 1924, although the first parade was centered around Christmas. In the early years, Central Park Zoo animals rode floats and balloons were not introduced until years later. The first balloon, Felix the Cat, was introduced in 1927. The first time the parade was broadcasted on national television was 1947. However, years prior, the parade was cancelled on account of World War II.

All the fan favorite characters and balloons were seen this year, some favorites being Pikachu and Eevee, which are Pokémon characters. The brightly colored characters are riding on a Pokeball sleigh, Eeeve dressed in a Santa hat, and Pikachu in a green snowflake patterned scarf. The adorable balloon debuted this year and was designed by Eric Hudspeth. This is the 20th year the parade has featured a Pikachu balloon.

Grogu, more commonly known as Baby Yoda, made its debut this year, as well. The loveable character from the television show The Mandalorian proves Macy’s commitment to featuring the biggest trends and crazes in popular culture.

And what would the Macy’s Thanksgiving Day Parade be without its most featured character, Snoopy?

Astronaut Snoopy returned for the third year, dressed in his orange NASA suit. Snoopy premiered in the parade in 1968, and has been a staple of the tradition since then. There have been eight different Snoopy balloon variations, two of which including his sidekick Woodstock. The Peanuts character balloon was a must see for most parade goers.

Other balloons include Greg Heffley from Diary of a Wimpy Kid, Spongebob Squarepants & Gary, the Boss Baby, and Sonic the Hedgehog.

More than just balloons, the parade was a musical thrill.

The parade boasted performances by Kristin Chenoweth, Darren Criss, Andy Grammer, Chris Lane, Nelly, Kelly Rowland, and Carrie Underwood. High school and college marching bands from around the country either returned and made their first appearances this year, including the Macy’s Great American Marching Band.

The parade’s full comeback proved to be a safe and exhilarating success, and a testimony of togetherness, determination, and holiday spirit. The floats, festive performances, new balloons, pleasant weather, and return of spectators made the parade one to be remembered.