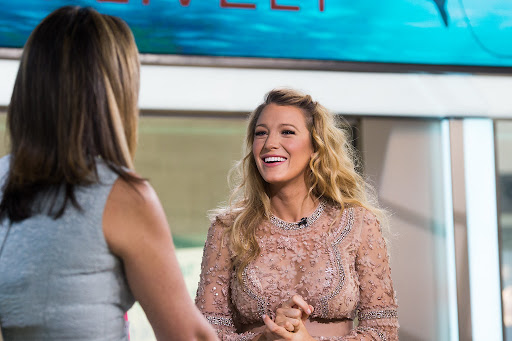 Pictured above is Blake Lively during an interview. She attended New York Fashion week and wore a baby blue power suit by Michael Kors at the Michael Kors show.

Blake Lively is well known for her role as the fashionable “It girl,” Serena van der Woodsen in Gossip Girl, so it wasn’t a surprise to others when she was present during fashion week. Lively and her sister, Robyn Lively, both made an appearance at the Michael Kors Fall 2022 Show on February 15, 2022. Lively’s friendship with Gigi Hadid was a primary reason for going to the show beyond just to show support for Michael Kors.

Well known 1990s and 2000s actress, Drew Barrymore, famous for her roles in, Never Been Kissed and 50 First Dates, made a rare appearance in public. She appeared at New York Fashion Week and was pictured with fellow actress, Alicia Silverstone, at the Christian Siriano show on February 12. She has just recently gained a friendship with Siriano and attended the show to support her friend.

Maude Apatow, daughter of actress Leslie Mann and director Judd Apatow, is currently most known for her role as Lexi on Euphoria, made an appearance at New York Fashion Week with co-star, Angus Cloud. She and Cloud wore matching Thom Browne tartan ensembles for the Thom Browne dinner on February 15. The party had a tartan theme which is a part of the history of the brand since 2006.

Nicky Hilton is known for first and foremost being a part of the Hilton family, but she is also a part of the fashion world as she is a businesswoman, and a fashion designer herself. She was seen at more than one show at New York Fashion Week. Hilton attended Markarian, PatBo and Alice + Olivia events over the course of the week. She was seen at the Markarian fall 2022 show on February 14, the PatBo Fall / Winter show on February 13, and she also attended the Alice + Olivia by Stacy Bendet dinner which hosted a lot of influencers just like Hilton.