The war symbol of Russia 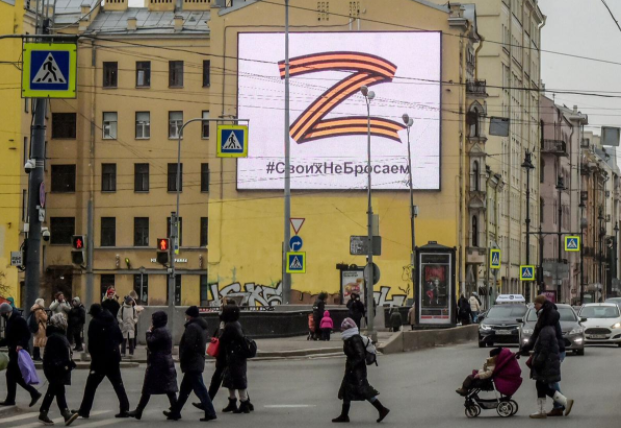 People crossing under a billboard featuring a ‘Z’, the symbol of the Russian and Ukrainian war. The text below the ‘Z’ reads: “We don’t give up on our people.”

The Russian Ministry of Defense posted the letter Z on social media on March 3rd 2022. According to the Ministry of Defense, the symbol is the abbreviation of “For Victory.” The ‘V’ has been used alongside the ‘Z’ as tanks and sides of buildings.

On February 24 Vladimir Putin moved into Ukraine. There have been reports that Putin is blocking information about the war from Russian citizens. Even before Russia invaded Ukraine there were tanks covering the border with the ‘Z’ symbol painted on them. It was previously thought that the symbols were meant to signal to other troops that they were on the same side. But now the symbol is being used in more public places.

Russian citizens in support of the war have been leaving a mysterious ‘Z’ on the doors of the more prominent protesters. The ‘Z’, alongside ‘V’, have also been painted on the side of tanks and other vehicles that have been taken to Ukraine. These two letters have now become a rallying cry in support of the war both within and outside of the country.

Many people have been protesting against the war. This includes everyday citizens and Russian celebrities. One of the most prominent groups that have been protesting is a Russian feminist band. The band has been arrested multiple times for performing various songs in protest of the war as well as expressing more radical beliefs.

Rita Flores, one of the members of the aforementioned band, received one of the ‘Z’s on her front door in an apparent attempt of intimidation. This happened to Antin Dolin, a Russian film critic, as well. There have been multiple online occurrences of this as well. Videos of people wearing clothes decorated with the letter have been posted to social media. Most notably, a Russian gymnast wore the ‘Z’ in place of the Russian flag.

Russia has cut off broadcasts in and out of the country and since they don’t have access to other news sources, some of the citizens of Russia don’t believe that there is a war. Since the Russian military invaded Ukraine there have been 1,663 casualties according to the United Nations website. Of those casualties, 596 people have been killed.