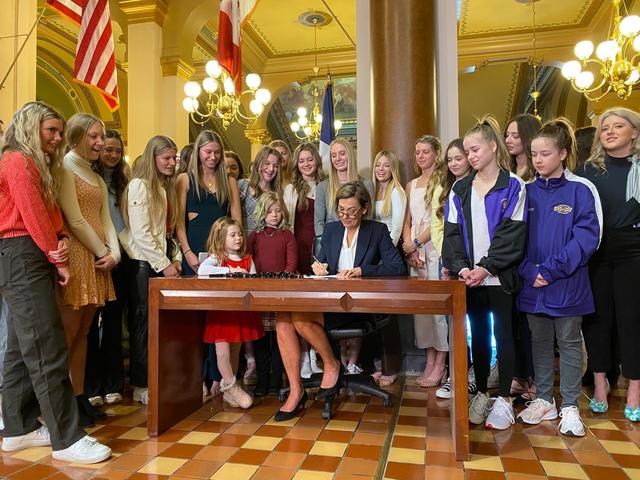 Governor Kim Reynolds signs an anti-trans rights bill in Iowa on March 3,2022. This law is effective immediately which may result in trans female athletes to stop playing in their sports.

On March 3, 2022 Iowa signed an anti-trans bill into law that bans trans girls from playing on the girl’s teams in high school and college level sports. Governor Kim Reynolds received only support from the Republicans of the Senate.

“No amount of talent, training or effort can make up for the natural physical advantages males have over females. It’s simply a reality of human biology,” Reynolds said. “Forcing females to compete against males is the opposite of inclusivity and it’s absolutely unfair.”

This is extremely dangerous for trans youth especially since their rates of suicide and self-harm are so high already. 82% of trans youth think of attempting suicide and 40% attempt suicide.

Reynolds was asked if a trans girl has ever out performed a cis-genedered female and the Govenor did not disclose a time when that has ever happened. She instead insisted we needed the bill.

On the other side of the political spectrum there are opinions forming that this law is more a popularity contest or a game to earn brownie points.

“Because the legislation would go into effect as soon as the governor signs it, she is showing once again that she’s more interested in scoring political points than caring about the impact of legislation on some of the most marginalized kids in our society,” democratic senator Zach Wahls said

This bill forces athletes to play on teams assigned by their gender at birth, not what they identify as.

Many people have stated that this goes against civil rights and schools also don’t know whether or not to follow the new law. Unfortunately, this bill puts school boards in an awkward situation

“Our school district welcomes and supports LGBTQ+ students, and provide them with the opportunities they deserve.” Phil Roeder from Des Moines said.

Iowa isn’t the only openly anti-trans state to restrict rights for trans kids. 10 other Republican-dominated states have signed this law into their state. These states include: South Dakota, Arkansas, Florida, Mississippi, Montana, Tennessee and Texas within the last two years.