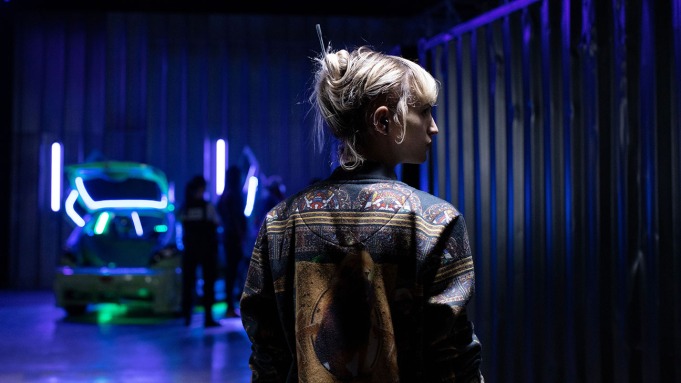 As a selection of nearly the entire film festival circuit from the last year, and winner of both the Midnight Madness People’s Choice Award at Toronto International Film Festival and the Palme d’Or at Cannes International Film Festival, Titane (2021, Rated R) is certainly one of the year’s most anticipated and discussed films among the arthouse film community. Distributed by Neon, one of the biggest powerhouses in independent film, and written/directed by Julia Ducournau, who also directed Raw (2016) and co-directed Menage (2012), there is a plethora of reasons for people to be excited about Titane, at least within certain circles and niches.

Titane’s official ‘synopsis’ reads “A metal highly resistant to heat and corrosion, with high tensile strength alloys, often used in medical prostheses due to its pronounced biocompatibility.” which is simply the dictionary definition of the word ‘titanium’. This decision to make the story as vague as humanly possible is a very intentional one, as this is the kind of movie I imagine people will get so much more out of by going-in blind. However, if someone must know, an alternate description is floating around: “A woman who has a metal plate in her head embarks on a bizarre journey.” Still not much, right? Well… I’d say that’s a good thing.

This film is absolutely gorgeous, from the impressive digital cinematography to the film’s intricate themes, Titane may read as a thriller with horror elements, but is told like a grandiose epic like “War and Peace” or “Don Quixote”. It is terrifying in nature, and poetic in form.

Evidently, the film presents a moral dilemma with a main character that, for the sake of this review, we’ll call ‘flawed’. She does some terrible things, but the film helps us forgive and understand these things, at least to a certain extent. The film in its earlier half shows us a cruel reality, one with very little emotion, and this is represented by often setting itself in industrial and cold environments: a garage, a police station, a post-modern condo, etc. This leads into a brazingly quieter latter half, quieter and more natural than the former, as our main character adapts to a new environment and mindset about life. Everything feels more natural, more free. This happens all within subtext, and honestly is even apparent if you didn’t watch with subtitles on. This is the epitome of visual storytelling.

The film has a lot to say about gender politics and expression of gender in a world of binaries and societal standards to fulfil, and even though some may not agree with what the film’s themes are likely inferring, I doubt anyone wouldn’t feel a sense of liberation through the main character as she grows as a person.

That brings me to why I love this film the most: Titane is shocking, but not for shock-value sake. I saw the film in a theater with 2 strangers. One seemed to hate it and was visibly cringing the whole time in front of me, and the other guy was blown away by the end, and we discussed our thoughts on it for a few minutes afterward. 2 complete strangers, bonded by a single glowing rectangle up on a silver screen… that’s beautiful. Some will love it, some will hate it, but undoubtedly everyone who sees it will have some kind of reaction, which is a far cry from an era in film where every film for many is a one-note “pretty good” and nothing more.

There were a few sequences that made me a little uneasy, however, and for that, I don’t plan on rewatching this film too often. Not to mention, these scenes run along for a little too long, and throw-off the pacing a bit. But please remember, that is entirely based on personal preference, so from an objective perspective, yes this is nearly a masterpiece, but I can’t help needing a little more room to breathe between these scenes.

Overall, Titane is a fantastical rollercoaster of emotions and shocking revelations. It will disgust you, it will make you want to dance, it will make you teary-eyed; it is modern, yet likely to be considered timeless. I’d give it an 8/10, on the verge of a 9, and from a pure filmmaking perspective, it’s a 10. I still need time to process the film, and even then I don’t think my thoughts will ever be conclusive. This film will haunt me for months, and I am willing to bet it will for others too.

Titane is now playing in select theaters and is Rated R.