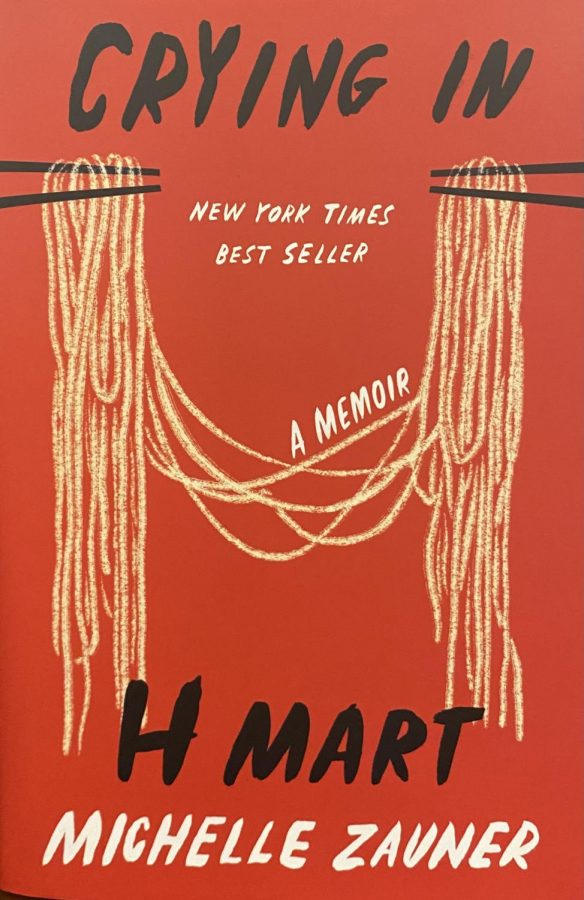 Michelle Zauner, front woman of the indie-rock band Japanese Breakfast, published her honest and bittersweet memoir, Crying in H Mart on April 20th of this year. A fan of her music, in which she also sings about her mother, I was intrigued to hear she released a memoir. Japanese Breakfast released her third album, Jubilee, full of excitement and fun, in June. Jubilee is celebratory and joyous after years of mourning. The novel shares the same title as an essay she published in The New Yorker in 2018. In her memoir, Zauner describes her experience growing up Korean American in Eugene, Oregon and explores her identity as a Korean American woman. She recounts her trips to Korea with her family, and the loss of her mother.

The memoir begins by describing H mart, an asian food market, and the both painful and joyous memories it brings of her mother, who passed from cancer. Much of the book is beautifully detailed descriptions of Korean food and cooking. Zauner recounts her wondrous and nostalgic childhood visits with her family in Seoul. After the loss of her mother, her sole connection to her culture, Zauner decides to learn how to cook Korean food, sparking a newfound passion and joy. Zauner doesn’t leave a single thing out, even the smallest or most embarrassing details, allowing the memoir to feel even more personal. She puts it all out there and it comes together beautifully.

Zauner also reflects on her moody and rebellious adolescence and describes the all too common turbulence that once transpired between her and her mother. She examines the complex relationship she had with her mother and deals with grief in an honest and self-aware way. “Now that she was gone, I began to study her like a stranger, rooting around her belongings in an attempt to rediscover her, trying to bring her back to life in any way that I could. In my grief I was desperate to construe the slightest thing as a sign” she writes. Zauner copes and keeps the memory of her mother alive by learning to cook Korean dishes and indulging in her culture she strayed away from in her teen years.

However, the book is not all so mournful. Zauner celebrates life, family, and love with humor and heart. The musician chronicles her love of music and her artistic career. Zauner, 32, was born in Seoul, South Korea and grew up in Eugene, Oregon. Zauner attended Bryn Mawr College where she studied film and creative writing. She moved to Philadelphia, where she was a part of the band Little Big League and met her boyfriend, and now husband. A highlight of the novel is Zauner’s wedding, planned in a rush before her mother’s death. Zauner writes how beautiful her mother made her feel on her wedding day, and how nobody could make her feel more beautiful than her mother, not even her husband. Anecdotes from all different periods from Zauner’s life, some bursting with euphoria, and some more solemn, are sprinkled throughout, causing the mood to change very quickly and feel very much like real life. Throughout the memoir, Zauner grows up and finds herself through both the loss of the person closest to her, and her reunification with the tender traditions she had once lost.

Crying in H Mart, rich with beautiful memories, humor, and vivid imagery, is a must read. Zauner makes you feel as if you’re right there with her through all the ups and downs, crying both tears of grief and joy.