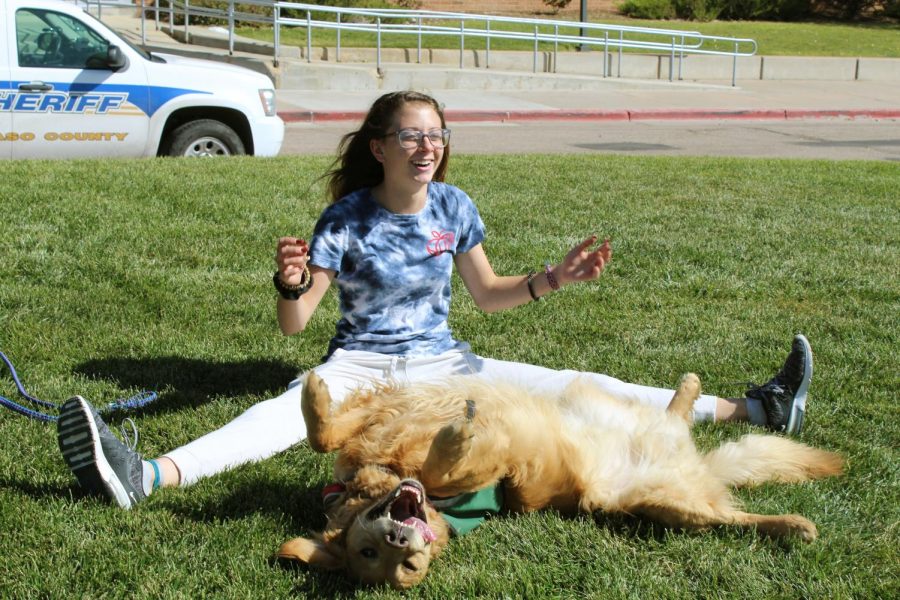 Smagner shares a smile with her dog, Scout, while taking him outside to release some energy. “I knew he was going to be my best friend and my partner, ever since he was a puppy,” Smagner said.

Holli Smagner 10 and her dog Scout can be seen together walking around the school hallways.  Scout is an 8 year old purebred Golden Retriever who was recently certified to be an emotional support animal.

“I can choose to bring Scout to public places if I need to, but mostly I just bring him to school every day,” Smagner said.

Smagner does not have to take Scout everywhere, but since he was certified in November of 2018 he is now allowed to come anywhere she requires him to. It is somewhat a newer process and experience so Scout can get used to being around so many people all the time.

Taking a service dog in public can have its challenges. Smagner mentioned that people do not quite understand some of the rules of being around a service dog.

“Most people just go up to him and say, ‘Hi,’ instead of asking, which is one thing I’m kind of upset about,” Smagner said, “But usually it’s not a big deal. Just learning that when someone is with a service dog you have to ask before you can pet it.”

Holli has had Scout for quite a long time and their bond has grown very strong over the past five years.

“I have him for severe PTSD that I’ve had since fifth grade,” Smagner said, “I just got him certified in November.”

Although Scout was a family dog before she was diagnosed with PTSD, their relationship has only grown stronger since he became her service dog.

“I knew he was going to be my best friend,” Smagner said, “and my partner, ever since he was a puppy,”