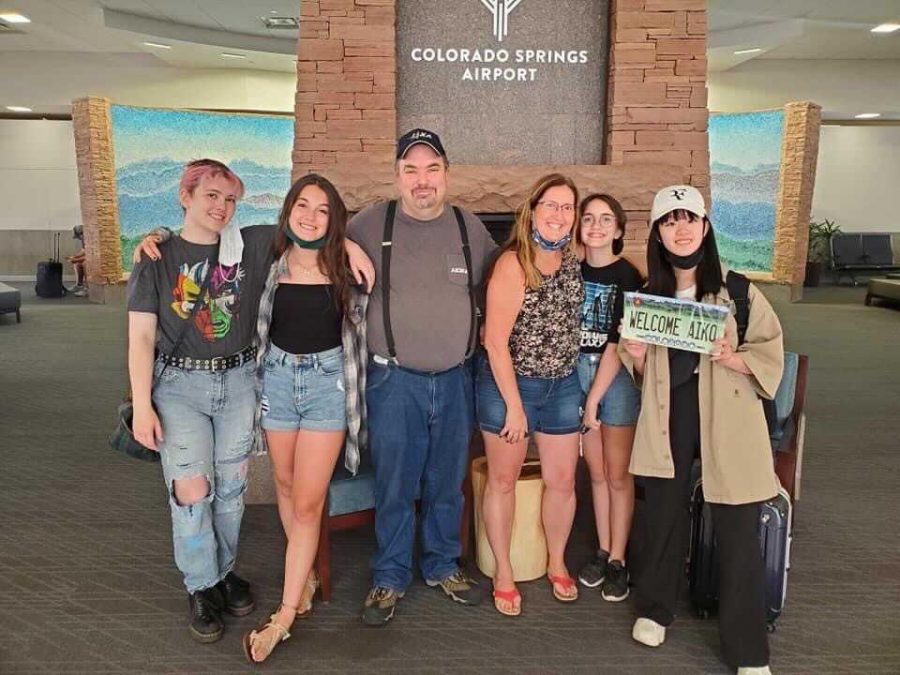 Aiko Hayashi and her host family at the Colorado Springs airport shortly after her arrival.

Aiko Hayashi 11 is an exchange student from Japan who will spend the next school year at Lewis-Palmer Highschool. She arrived on the 11th of August after a very long day due to the flight and time difference. After her arrival Hayashi went to a diner and ordered a cheeseburger which surprised her and she had her first culture shock in the bathroom.

“I went to a diner and ordered a cheeseburger and it was so big and I could only eat a quarter of it,” Hayashi said, “In Japan the shower and bath are separated but in America they aren’t.”

Hayashi’s main goal that she wants to accomplish during her stay is to get rid of any prejudices that she has against other cultures and people. Hayashi wants to use this time to get to know a lot of different people and their cultures.

“Two years ago I went to New Zealand for three weeks and went to a local high school and from that experience I realized that I had a few prejudices for other people who had different nationalities and backgrounds compared to me. I want to destroy these prejudices and understand the diversity and values, so I decided to come here as an exchange student,” Hayashi said.

Since Hayashi’s life in Japan revolved mainly around school, she also wants to use this exchange year to try new things and really use her freetime.

“I got up at 6 am and school started at 8:40 am and there are 7 periods per day but they are shorter than in America. School finished at 4:15 pm in Japan. After school I either went to the tennis club or an extra school to study for college and that school finished at 10 pm,” Hayashi said, “In Japan I always studied, so in America I want to try something like sports. I also went camping.”

After Hayashi’s exchange year she will finish school and follow her passion for architecture.

“I have to finish 10 months of school, and after that I am going to study architecture in college. I haven’t decided where, maybe in Finland or Italy, because Finland is the best place for learning architecture,” Hayashi said.