Mason shines a light on the costume department 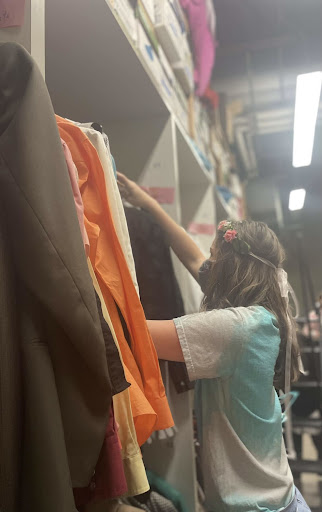 Halie Mason 11 looks through one of the racks in the costumes closet for a costume for the fall musical, Matilda. She spent a lot of time organizing and making it easier to find what she felt would look good. “Some things we look for are if it’s practical on stage. Can it be taken on and off easily if there's a quick change and if there it's if it's too small are we able to tailor it to the actor and then same thing for if it's too big,” Mason said.

Halie Mason 11 is one of the new costume crew heads for drama club and is currently working on costumes for the fall musical, Matilda. She’s had the experience on costumes crew before, but this year she’s taking charge as a crew head.

“My freshman year I auditioned for the play, actually,” Mason said. “I didn’t get into the play so I ended up on costume crew and I actually really liked it so I thought so I’d stick with it and lo and behold I’m crew head now.”

Mason and her co-crew head lead the crew that they chose to work alongside with. Together, they can get more done more efficiently with the different skill sets.

“I have an amazing co crew head. Her name is Maddie Thompson and she is in charge of hair and makeup so that’s her domain, while I am in charge of the technical side like cues and quick changes,” Mason said. “In my current crew, I have some people who are really good at hair and makeup, I have some who are good at putting together outfits, I have a seamstress who can sew and they all work together really well. They’re all fun to be around and I really enjoy going there after school everyday to see all of them.”

One of Mason’s biggest influences is the past crew head, Belle Coon. Belle taught Mason how to run things and keep things under control.

“My biggest influence is Belle Coon, she was the old crew head. I still talk to her a lot. She has helped me through a lot of the stuff with this show,” Mason said. “She’s going to college up in Denver now and pretty much taught me to just keep on going and keep on smiling and just figure it out.”

Mason is learning the strings of being in charge of a crew as she goes. She is learning her own system and how she wants to continue to do things in the future, but for now, she’s new to this.