Gearhart makes the most out of his high school years 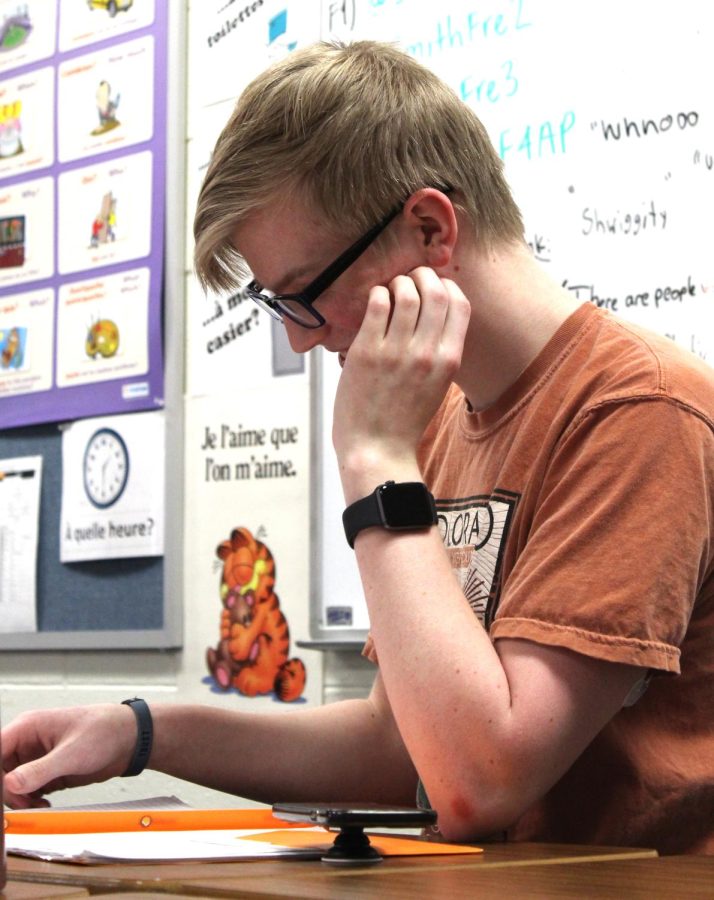 Gearhart 11 studies in French class before rehearsals and band practice. Gearheart has played many characters throughout his acting career, his favorite being Nigel, an excited seven year old boy, from the musical, “Matilda.”

Cameron Gearhart 11 keeps up with band practice, theater rehearsals and school at the same time. Whether acting on stage or playing percussion alongside the Pep Band and Wind Symphony, Gearhart doesn’t neglect school work or his own free time, and rather finds fun ways to combine hobbies and responsibilities.

“I try to get more stuff done during school and then afterwards I can just focus on everything else and have my time to chill,” Gearhart said.

Gearhart fell in love with theater at a young age, and before he knew it, theater had won his heart. Many different shows influenced his love for theater. After watching the show, “Beauty and the Beast,” he began his acting career by trying out for the school play.

“I’ve been on casts for every show at our school, whether it be an understudy role or an actual smaller role,” Gearhart said. “The only one I haven’t done was ‘Narnia’, when I was part of the sound crew.”

While acting and performing in front of an audience can be overwhelming sometimes, Gearhart never let stage fright overtake him. He uses his creative personality and comes up with tricks to turn the anxiety in his favor.

“The stress of acting is more than actually being on stage and being a character,” Gearhart said. “As long as I am in the mind of the character, I’m going to see the audience, but I won’t really notice they’re there.”

Gearhart is preparing for the spring show, “Fools,” where he will be playing the role of an older figure, a magistrate in a major Ukrainian city full of foolish people who are struggling to make their way in a strange society of the late 1800s.

“I’m really excited for everyone to watch the show. Whether you’re just watching or if you’re part of the crew, it’s just a funny show to be a part of,” Gearheart said. “So much wit and humor in it.”

Gearhart is also a big Nintendo and Virtual Reality (VR) fan. Being a tech enthusiast, he found a way to pursue his hobby in school. Last semester he took a recording and songwriting class where he got more exposure on how to use music-making software, but also different instrument types. Keeping up all of his different hobbies keeps Gearheart plenty busy.

“I just have a very well-rounded Jack of all trades personality, where I’m trying to learn several different things at once,” Gearhart said.

When getting overwhelmed with his busy life, Gearhart finds peace in music. Music represents a key part in his future career. He wants to inspire other people as a musical educator, as he himself is inspired by other people beginning and creating a musical path.

After a long day, he is never hesitant to slow down and take one step at a time and then gradually get back up to speed. Gearhart dares to dream without setting unrealistic expectations for himself.

“When there are challenges with music and theater, I take every little thing step by step. I realize this scene or passage of music doesn’t need to be perfected in one go,” Gearhart said. “It really is just a bit by bit, step by step. Just take a second to relax and then it’ll be all okay.”

Gearhart puts all his energy into everything he does, always striving to be the best version of himself so that one day someone might be inspired through his hard work.

“I hope I can be an influence to the younger grades who don’t have someone they can rely upon,” Gearhart said. “I just want to be an example, that source of kindness to others and perseverance because what’s the point if you’re just going to give up halfway through?”