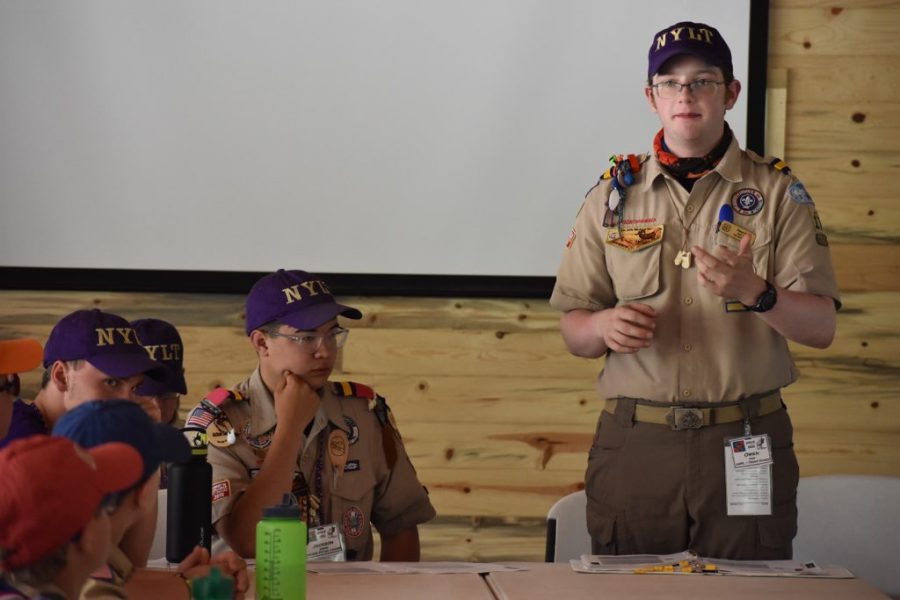 Owen Pike 12 gives instructions to the troop leaders, as they prepare for the participants of the National Youth Leadership Training to come. Pike is enjoying his remaining time as a Senior Patrol Leader, having worked his way up to the position after five years.

Owen Pike 12 started as a cub scout in the 1st grade, then graduated up to boy scout in the 8th. Now, he is the Senior Patrol Leader (SPL) of the National Youth Leadership Training program, which is a program Scouts BSA, formerly known as boy scouts, offers to their participants.

The Senior Patrol Leader looks over all of the other positions in the camp, assisting anywhere they are needed. They are the youth in charge of everyone, the only person above them is Scout Master.

“I don’t necessarily run the course entirely, but I’m basically second in power to the Scout Master, who is in charge of me and also deals with all the adult logistics. I hire staff, ensure that the staff are trained, organize the training weekends, make sure everyone on staff is aware of their duties and the chain of command, and lastly making sure that everything is running smoothly,” Pike said.

To achieve the position of SPL, Pike had to work his way up the ranks. He began as a troop guide and did that for two years, despite the fact that most only do it for one. From there, he continued his way up until he reached the SPL.

“I was assigned ASPL, or Assistant Senior Patrol Leader, where basically you had to make sure those running activities knew what they were doing and had adequate materials,” Pike said. “I was then the ASPL of TGs, meaning I was in charge of all the troop guides, basically making sure the TGs were working with their patrols correctly. This year, I am the Senior Patrol Leader.”

Although Pike loves being a part of boy scouts, as well as this camp, 2022 will be his last year participating in it. He has been a part of the program for five years now, and feels he’s gotten all he can out of the experience.

“It’s pretty much my final year. I think I have the most experience out of any of the staff that I’ve seen,” Pike said. “I have never seen someone who was an SPL come back. Mainly because, it is the most work-heavy out of the positions and I’m 18 now, so there’s basically nowhere else for me to go unless I want to become a part of the adult staff. But I also have college and such coming up, so I won’t really have the time to do it.”

As much as he enjoys the program, things can, and will, go wrong. From ansty participants, to issues with the camp, there are many challenges Pike has to overcome in order to keep things running smoothly.

“Stuff can go kind of wrong all of the time. On occasion, the participants don’t want to be there either, and we have had instances where they do not cooperate for that reason alone. Sometimes we have to kick them out of the course, which is bad for how the patrol functions in general, because you’re developing a team, that’s like the entire point of the course design,” Pike said. “Also, sometimes just having to deal with stuff that comes up, and it’s never fun. One night, I had to stay up until 2 A.M. dealing with something, and we had staff meetings at 5:30 A.M., so that was a lot of fun.”

Despite these challenges, there are still a lot of things Pike enjoys about the program. He always feels accomplished after seeing the great amount of progress all the participants make by the end.

“Back in November, I got recruited. I’ve been working on it since, so it’s a long process, but it is a very rewarding experience because after a week of doing course work for 14-16 hours everyday with these people, it’s nice to see it all pay off,” Pike said. “The participants have learned a lot and I also became close with a lot of people.”

Between participating in the course itself, and, helping to run it, Pike has enjoyed all of his time with the National Youth Leadership Training program and wants to encourage people to join it themselves.

“Personally, it has changed my life. We teach a lot of useful skills and it really helps you develop not only as a person but it also develops your communication skills,” Pike said. “It shows you how teams work together and it will give you a lot of skills that will help you become an effective leader and go back there.”