Schleger is living her American Dream to the fullest 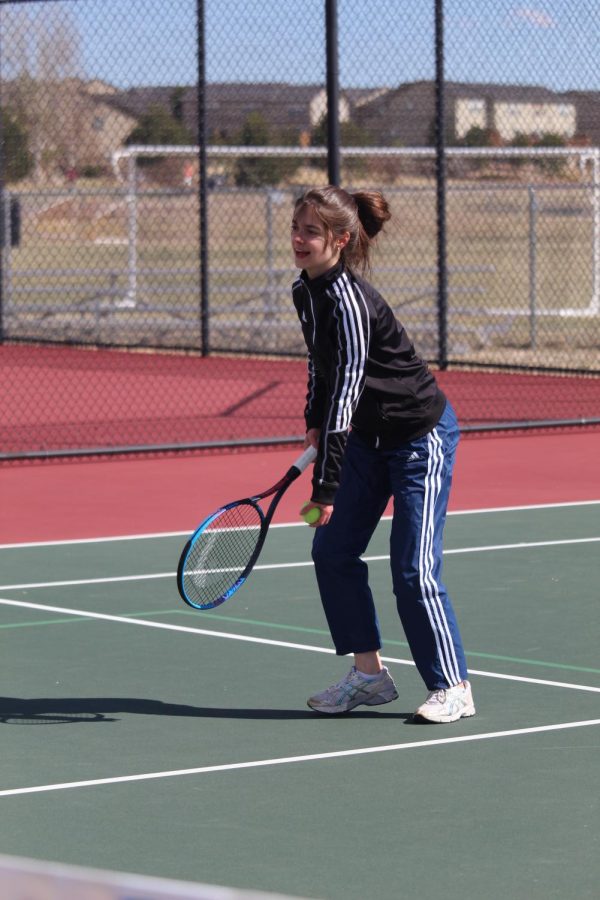 Schleger practices with her tennis team after school. “I got so much out of trying for basketball and tennis, so all the hard work really does pay off,” Schleger said.

Maya Schleger 11 is a German exchange student who came to study at Lewis-Palmer High School after receiving a scholarship for the 2021-2022 school year. Before coming to America, Maya was nervous to leave her life in Germany and move to another continent. Her friends and family supported her in making this decision, which led to her accepting the scholarship and taking life into her own hands.

“At first, I didn’t want to leave Germany, but after I sat down and thought about it, I decided that I was not going to stand in my own way and let this once in a lifetime opportunity pass away before me,” Schleger said.

The process of getting the scholarship was long and difficult. Schleger applied in December 2019 and after months of waiting, she got the call telling her she will be spending an entire year studying in America for free.

“When I applied, I wasn’t expecting to actually get it. When they called I was shocked, scared and excited,” Schleger said. “I only had one day to talk to my parents and make a decision and I didn’t want to regret anything.”

After making the decision, leaving was not a hard thing to do for Schleger. She decided not to lose time during the 10 months overseas and she was ready to try as many new things as possible, to visit and learn new things.

“Once I made the decision, I knew in my mind that I have to do everything in my power to take advantage of the next 10 months on my own,” Schleger said.

Because of her openness to people and happy presence, making friends wasn’t a hard task for her. Her courage to go up and talk to people greatly assisted her in being able to make friends.

“The feeling of coming to a place and not having any friends is strange, but making friends wasn’t as hard as getting close to people and having real friends,” Schleger said. “Most of the time, I had to be the first one to start talking to people and simply ask them if I could sit at lunch with them because I didn’t know anybody.”

Even though she was in America only for a couple of months and never played basketball before, she still tried out for the Lewis-Palmer High School girl’s basketball and made it to the C team. This was only the beginning of her American experience.

“Sometimes it was hard and overwhelming with the practices and because I was the least experienced on the team, but my teammates and coaches were so supportive and patient with me. They helped me a lot,” Schleger said.

After the basketball season was over, she tried for the tennis team this spring and made it to the JV team.

“With tennis, I don’t have the team connection, but it’s still a very good experience. There are a lot of beginners in the team, which takes the pressure off, knowing we’re all in the same boat,” Schleger said.

Schleger is right now in the middle of the tennis season, making the most out of her time in the U.S. After going back to Germany, she plans on finishing high school and then taking a gap year to travel around the world. Her passion for people and living life to the fullest made her exchange year one of the best times of her life.

“I just want to be remembered for putting a smile on someone’s face. Not a lot of people, I am happy if I make someone else’s day,” Schleger said. “I want to invest more in the relationships I already have and just live life. Here I learned that everything works out in the end, even if sometimes the future might seem a little unsure.”