Tahmindjis balances all the different areas in her life 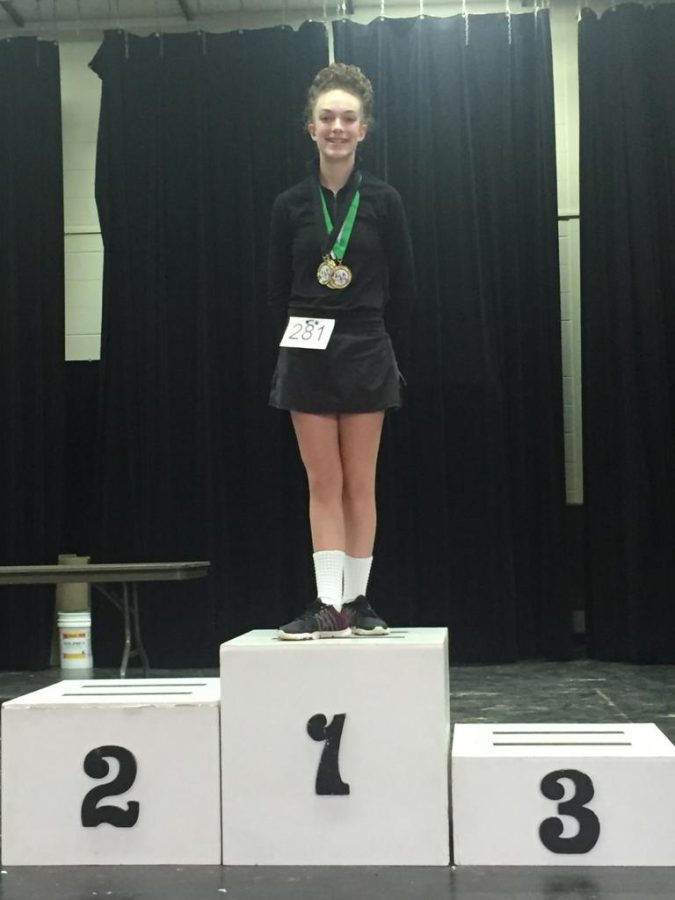 Sydney Tahmindjis 10 receives first place in an Irish Step Dancing Competition in 2018. She no longer competes as a dancer, and instead focuses her time on the JV softball team.

Sydney Tahmindjis 10 is in her second year at Lewis-Palmer High School, after moving from Highlands Ranch a couple of years ago. Her passion for sports and construction, as well as keeping up with school and work have kept her always on the move. Without complaining about any hard task, she picks up important skills from every school subject and applies it to her everyday life, whether that is welding, construction, math or history, which are only a few of her favorites.

“I like the satisfaction that comes with the finished product of something you make with your own hands,” Tahmindjis said. “Welding (metal working) teaches you a lot of important life skills so that later in life, when you need to fix something you can just do it yourself.”

In school, she was recognized as a Responsible Ranger, which only motivated her to improve and be the best version of herself.

“I want people to remember me as someone who worked hard and didn’t slack off,” Tahmindjis said. “That I actually tried and put myself into what I was doing 100% instead of just doing the bare minimum.”

After her freshman year during Covid, and not being able to come to school, Tahmindjis realized how important it is to be involved in school activities, especially team sports. She decided to try out for the softball team and made JV in August 2021.

“It was a week before tryouts and I only went to a single practice before that. It was a little scary because at that point I hadn’t played for seven years,” Tahmindjis said. “I only knew one other person there and that almost stopped me.”

The desire to be part of something was bigger than the fear of inexperience. While stepping out of the comfort zone was frightening for her, Tahmindjis managed to put desire over fear and as a result she made the team and had a great experience.

“I like softball because of how fast paced it is, the whole game revolves around working as a team and being part of something. You can’t play the game by yourself, you have to have a team that works well together, where everybody does something,” Tahmindjis said.

As well as softball, she is also interested in Irish Step Dancing. Her passion began when one of her friends performed a dance on Saint Patrick’s Day. Not long after that, Tahmindjis started practicing and competing, bringing home many medals. After 6 years of Irish Step Dancing, Tahmindjis decided to focus more on softball.

“Of course I would like to go back to dancing, but because of the commute, I found softball coming more in hand for me,” Tahmindjis said.

With multiple areas in her life to balance, Tahmindjis finds ways to put quality time with her friends and family first. She loves hanging out with friends, going ice skating or watching ice hockey.

“I am happy whenever I am around my family and friends, anytime I’m with people that want to have a good time,” Tahmindjis said. “I always valued my parents’ advice, they taught me to be who I am, who I want to be without being ashamed of it.”

Tahmindjis guides her actions towards a life far away from the common. Working on her dream everyday, she doesn’t let any obstacle stop her or slow her down. She overcomes everything coming her way with courage, learning and growing through every experience.

“Do what you want to do and don’t let people stop you,” Tahmindjis said. “Do what makes you happy and don’t let other people tell you it’s wrong just because they don’t like it, rather just set your own path.”