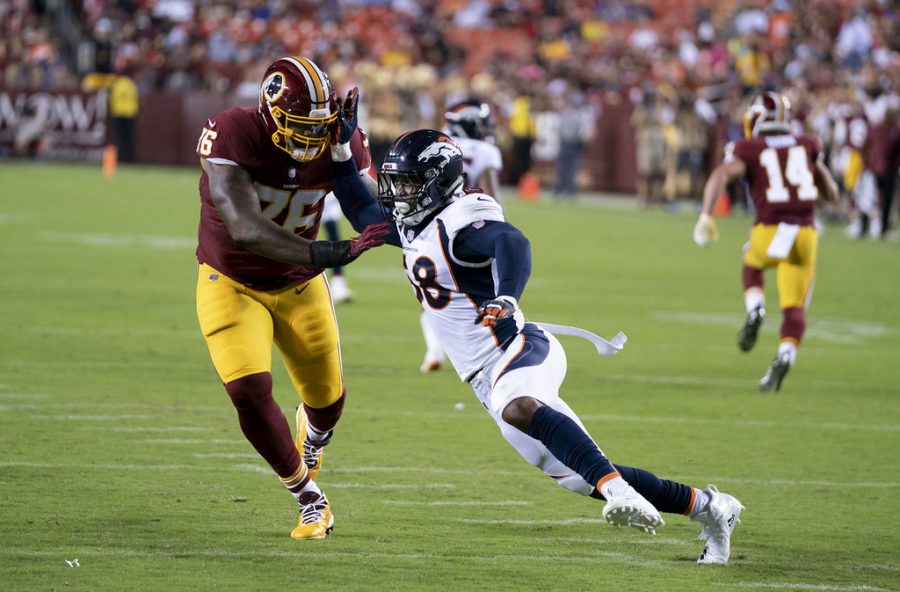 It’s always tough whenever you leave. I love all of my fans. I love Broncos country. When I said, ‘Broncos for life,' I meant that. It was an honor and a privilege to play here,” Miller said. Von Miller has been through ups and downs in his life. He loves all the fans in Denver, and loves Bronco Country. "Morgan Moses, Von Miller" by KA Sports Photos is licensed under CC BY-SA 2.0

Von Miller is an American football outside linebacker for the Los Angeles Rams of the National Football League. Miller played at Texas A&M in college, and he was drafted by the Denver Broncos in 2011. Miller was also announced as the Super Bowl MVP after the Denver Broncos won Super Bowl 50.

“I really don’t look at myself as a defensive end or a linebacker or a cornerback or a safety,” Miller said. “I don’t try to limit myself to just rushing the passer or dropping back in coverage or being a run-stopper, I try to be great at football, and that is why I want to go into the Hall of Fame someday.

On November 2, 2021, Miller was traded to the Los Angeles Rams. The Rams have decided to send a second-round pick and third-round selection in the 2022 NFL draft to the Denver Broncos in exchange for Miller. The Broncos will also pay the $9 million dollars of Miller’s remaining $9-7 million base on the salary for the nine games left in the regular season.

It was a shock to see one of the Denver Broncos top defensive linebackers be traded so early in the season. The Broncos had no other choice but to trade Miller to a team that has one of the best records in the NFL so far this season. Since the trade deadline was coming up for the Denver Broncos, they had to make a very decision to trade Miller to another team in exchange for a second and third round draft selections in the 2021 NFL draft.

He told the reporters and the media about how surprised and in shock with his trade to the Rams. Von got emotional about how hard it is for him to say goodbye to a team that he has been with since he was drafted by the Denver Broncos in 2011.

In Los Angeles, Miller will join a 7-1 team that is among the favorites for a Super Bowl LVI run. Miller will be accompanied by three-time NFL Defensive Player of the Year Award Aaaron Donald and All Pro Cornerback Jalen Ramsey.

“Great team, I’ve been a huge fan of defensive tackle Aaron Donald for a long time, they have a great defense. I’m excited, I’ve always been a great teammate and I’m going to continue to do that,” Miller said. “I am hoping to play on Sunday night where the Rams host the Tennessee Titans.”

Now that Von Miller is on the Los Angeles Rams, he will be playing with Aaron Donald as his new teammate. With Miller and Donald being on the same team, and with the record that their team has right now, they will make an unstoppable defensive linebacker duo on the team.

“On the back end of things, it’s not really that bad. It’s better for me. It’s better for the organization. And you just gotta let reality sink in that I get to play with Aaron Donald and Jalen Ramsey and Leonard Floyd and Matthew Stafford and a solid offensive line. And they got a solid team,” Miller said.

Miller’s trade sent him from the Denver Broncos to California about his expectations for joining a team that could be a contender for a Super Bowl win this season. With Von Miller joining the Rams for the rest of the season, the rest of the NFL teams will see that Miller is ready for a playoff and Super Bowl win for years to come with the Rams.

The head coaches of the Denver Broncos and the Los Angeles Rams spoke to the press about Von Miller’s shocking trade to the Rams in exchange for a second and third round draft pick in the next NFL draft. Broncos head coach Vic Fangio talked about Miller’s status as a player and what his focus is on the team.

“I’m not worried about Miller’s status as a player,” Fangio said. “What I’m worried about is this team and doing anything and everything we can to get Miller up to playing better on this team. That’s my only focus.”

Rams head coach Sean Mcvay talked about how excited he is to have Miller on the Rams, and how he will make a great addition to the team.

Despite arriving at the Los Angeles Rams practice facility only one day earlier, Miller did not shy away from describing the Rams potential as they surge towards a playoff run.

“This team is ready to win right now, ready to win championships right now, ”Miller said. “Now that I am on the Los Angeles Rams, I’m excited to be a part of the journey ahead and what it has in store for me as a player,” Miller said.

“I will certainly add another dimension to the Los Angeles defense as the team continues to build momentum towards making it to the Super Bowl,” Miller said.