James Harden Is Traded To The 76ers 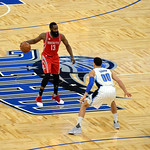 James Harden isolates on forward, Aaron Gordon, to score a basket. Harden set a franchise record; 60 points in this game.

The Philadelphia 76ers are a team that has fallen short of bringing home a title to the city of brotherly love for years. After trading the corner-stone of their franchise Allen Iverson in the 2000s they struggled to get over .500 for the next couple of years.

This continued until the 76ers brought in general manager, GM, Sam Hinkie. He brought in a new mindset to the fans of Philadelphia to be patient and trust the process. The fans in Philadelphia questioned what that meant at the time but little did they know it would be a phrase they’d sing for the next decade.

The tactic that Hinkey brought into the organization was to tank the team for years and bolster  draft picks for the future. The idea behind this is that they would hold a number of lottery picks and build a team to be feared for the future.

They executed this with lottery picks spent on bright young stars like Robert Covington, Joel Embiid, Ben Simmons, and Markelle Fultz. Fuel was only added to the fire when they brought in free agents J.J Reddick and Jimmy Butler to make the 76ers a force to be reckoned with.

This team, while being amazing, was sent home year after year despite many Successful regular seasons and MVP caliber years from Joel Embiid. This team was in need of a culture change which they accomplished by bringing in all time great GM Daryl Morey and championship coach Doc Rivers.

The city of brotherly love had the ingredients to make a championship team. After a disappointing performance from Ben Simmons in the playoffs GM Daryl Morey put his head to the grindstone and went to work.

Just this last week he shocked the world by bringing in James Harden. This move has shaken the NBA and has brought a good team to new heights. This trade not only got them a top ten player in the NBA, but also allowed them to keep their young valuable assets and core players while keeping their MVP man Joel Embiid.

Insiders around the league say that this duo is the best center and guard tandem that the league has seen since Kobe Bryant and Shaquelle O’neal.

The salary cap situation of the team has the writing written on the wall. Management put all their pieces into place for a championship and if they fall short they will be paying the losses for years to come.