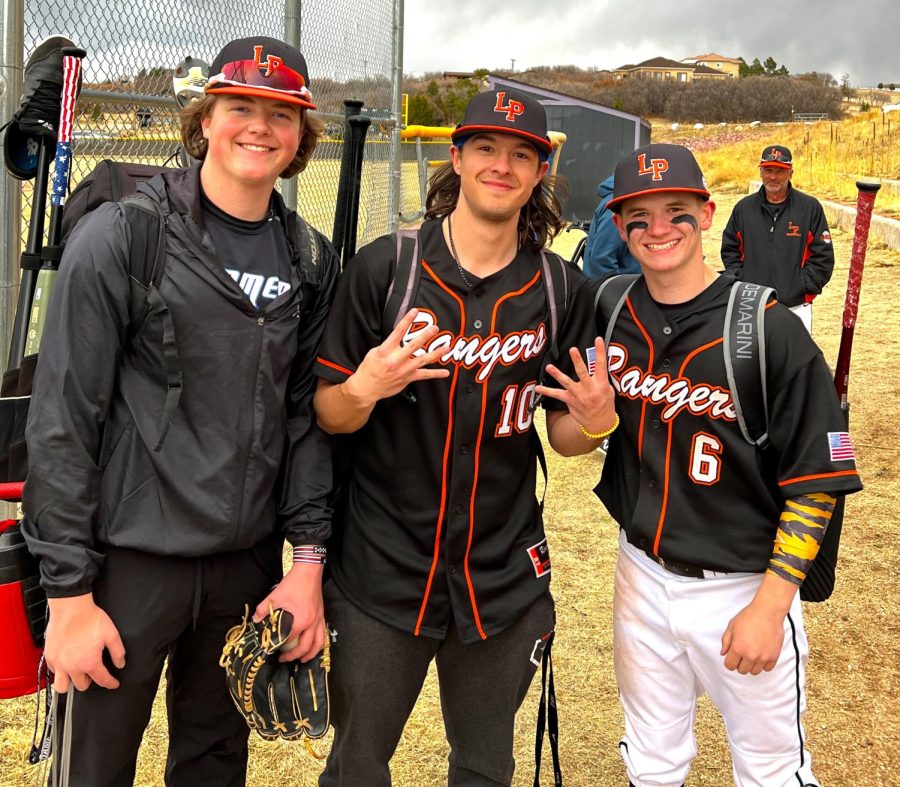 (Pictured left to right) Matt Rhoades 11, Max Randis 12, and Daulton Johnson 12 bask in the satisfaction of having just redeemed themselves from a loss against DCC. Randis hit a crucial home run in the beginning of the game that started the lead for the Rangers, setting them up for a win. Final score being 12-2, favoring the Rangers.

The Lewis-Palmer Boys’ Baseball Team played against their conference rival, the Discovery Canyon Thunder on March 31, 2022. This was the second matchup between the two teams after the Thunder beat the Rangers earlier in the week. The Lewis-Palmer Baseball Team was able to defeat Discovery Canyon Campus, DCC, in the second game with a crushing score of 12-2.

“We were all fired up after the loss against DCC in the first game, which gave us the drive to go out and beat them. We had very good communication and we all had amazing energy, whether we were playing on the field or supporting from the side,” Max Randis 12 said. “After the loss to DCC we all felt that we had to come back 10 times better and with even more focus, and we did just that.”

Randis, who has committed to play baseball at Moberly Area Community College in Missouri, touched on how the season has been going so far for the Rangers’ Baseball Team. The Lewis-Palmer Baseball Team was able to make it into the playoffs last season and Randis is expecting nothing less than that this season.

“This season so far has been one of a kind,” Randis said. “We have such a great group of guys who are all great ball players, but also great young men who all get along. I think what has really fueled my improvement is knowing that we are capable of making it to the playoffs.”

Overall the team was satisfied with how the game went. Being able to go on the road against a team they just lost to isn’t easy. The Lewis-Palmer Rangers Baseball Team was able to do it and overcome a crushing loss a couple days earlier. Despite this victory, there is still work that needs to be done from the team.

“I was satisfied on the mound, but not at the plate that day,” Matt Rhoades 11 said. “The season is fun and exciting, but we need to work on chemistry.”

This win against DCC was considered a “revenge game”. After not being successful on their home turf, the Rangers were able to respond in the second game. The team was ready to go right from the start.

“No one was appearing to have a lazy attitude and we were ready to take the win. We were ready and hungry for revenge,” Daulton Johnson 12 said. “I was satisfied with how I played. I started the season out cold at the plate, but after working every day after practice and putting in the extra work, I can see a drastic improvement in my hitting.”

Johnson, who committed to the University of Harding his sophomore year, mentioned how it didn’t matter how skilled a team is if the team doesn’t show up ready to the field. He believes the scoreboard will reflect that.

“It felt great to beat DCC and take revenge, but we as a team need to realize, no matter what team it is, you need to play your heart out and never take a play off,” Johnson said. “No matter if they are a weaker or a stronger team, you put as many runs on the board as possible and never let up. Oftentimes, all it takes for a team to win a ballgame, is to have more grit than the other.”