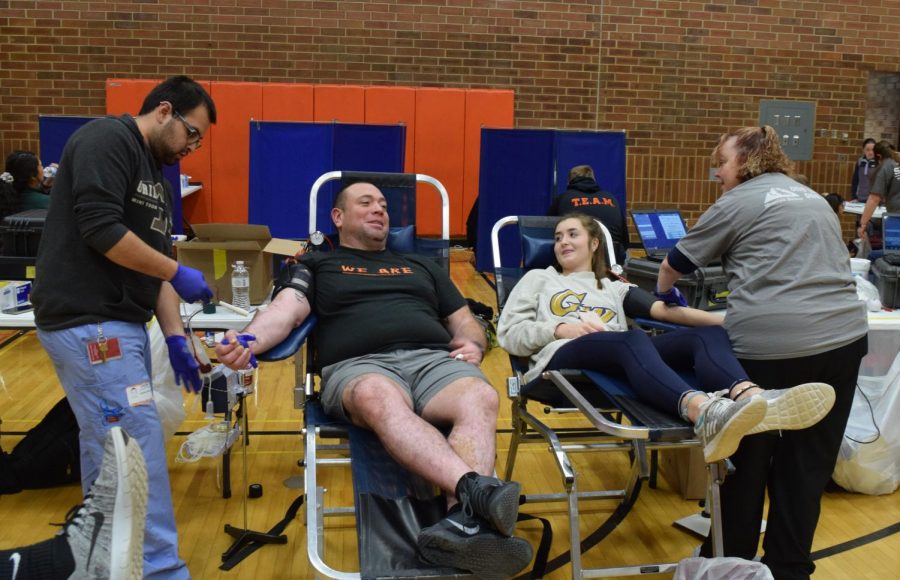 On Thursday, January 24th, Lewis-Palmer’s HOSA chapter hosted a blood drive. Faculty members, juniors and seniors aged 16 or holder were able to participate. While the number of expected participants was originally relatively low, the final number of participants doubled the expected amount.

Under the partnership between the school’s HOSA chapter, specifically chapter advisor Monica Tupper, and Vitalant, the non-profit who assisted in organizing and running the drive, the blood drive saw an estimated 40 to 45 participants.

Although the blood drive is new to Lewis-Palmer, Tupper has aided in hosting blood drives at her previous school for years.

“One of the biggest group of donors is high school students and people between the age of 16 and 22, so having high schools do this is huge,” Tupper said.

With the U.S. currently in a nationwide blood shortage, people who are willing and able to donate can help combat the low numbers. According to the American Blood Center, only ten percent of the population eligible to donate blood actually do so.

More than 15 million pints of blood are transfused in the U.S. alone each year, and 1 in 7 patients entering a hospital are likely to need some of that blood. One student donating blood was one of those patients years ago.

“I had a blood transfusion as a baby and I just want to give back and help people” Kayla Chartier 11, said.

Other students, such as Addie Feek 12, were also there to give back to the community.

“I think it’s important that as a community that we can help people who are in need, obviously there is a lot of trauma going on right now and stuff like that, so I just think it’s important to do my part so I can help other people,” Feek said. “It hurt a little bit, but it was definitely worth saving 3 lives and helping people, so it wasn’t too bad”.

For those who did not get a chance to donate blood this past Thursday, they still can choose to donate. Vitalant, the non-profit who worked with Tupper for the blood drive, has a location in Colorado Springs where those interested can go to donate. Vitalant’s donor center is located off of Austin Bluffs and Academy.

An estimated 40 to 45 participants ended up donating blood during the school’s blood drive – that means there were at least 40 to 45 pints donated. Keeping in mind that one pint can save three lives, the blood drive at Lewis-Palmer alone theoretically saved about 120 to 135 lives.