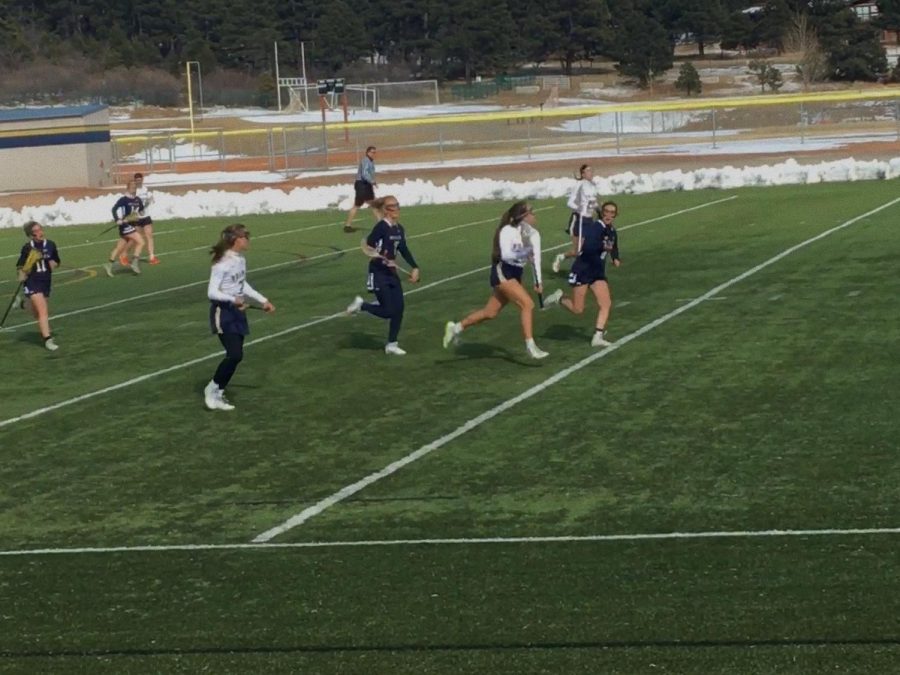 Holly Esposito and Aubrey King run the ball downfield towards the net.

Lewis Palmer’s very own girls lacrosse players sprung back into action along with a number of other athletes this spring. Lacrosse is a second semester sport for both boys district-wide.

Holly Esposito 10 recently started her second year of competing with the district girls’ varsity lacrosse team. Both boys’ and girls’ lacrosse teams are spring sports, meaning they practice and have games only in the second semester of the school year.

Unlike many other schools, Lewis Palmer doesn’t have its own individual girls’ team. “The girls combine because there’s not enough girls to make two different teams, so they play with Palmer Ridge and the boys combine and play with Lewis Palmer,” Esposito said. The girls practice daily at Palmer Ridge and have games weekly as well. “We go to practice everyday with all the girls from each school.”

Mati Humphreys 10, another varsity lacrosse player, is a student at Lewis-Palmer. Humphreys has played lacrosse since she was seven years old, and this is her first year playing varsity for the team. She plays as an attacker, which means her job is to get possession of the ball, run downfield, and shoot goals.

Although the team currently has two wins and five losses, the girls are still improving. Humphreys mentioned that she sees active improvement even though their team isn’t as successful as she had hoped. “I think we’re getting better as a team as opposed to the beginning of the season.”

The team has it’s odds stacked against them due to the loss of seven seniors from the previous season. They are now left with only four seniors, which Humphreys said she thought could be part of the reason for their low number of wins so far. The majority of the team consists of underclassmen who are less experienced than the upperclassmen.

On March 19, Palmer Ridge faced off against Muller High School at Palmer Ridge. The game was neck and neck and ended in a tie game of 7-7 points. In overtime, the clock ticked down with only a few seconds to spare when Esposito scooped up the ball and sprinted all the way downfield.  All the other players were multiple places behind her when Esposito shot the winning score.

Humphreys ran up to Esposito and greeted her with a giant bear hug after the shot, followed by the rest of the team. The girls jumped around and celebrated all of their hard work had paid off. This was their first win of the season, soon to be followed by another win a few weeks later.

When asked what her favorite aspect of her lacrosse team, Esposito replied “the team bonding and how everyone gets so close because we have to work as a team.” As seen in the previous game, the teammates clearly support each other and are as close as Esposito says they are. The aspect of closeness remains within this girl’s sports team.